Delineations of the Ox Tribe The Natural History of Bulls, Bisons, and Buffaloes. Exhibiting all the Known Species and the More Remarkable Varieties of the Genus Bos. 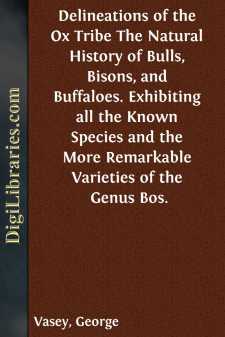 The primary object of the present work, is to give as correct and comprehensive a view of the animals composing the Ox Tribe, as the present state of our knowledge will admit, accompanied by authentic figures of all the known species and the more remarkable varieties.

Although this genus (comprising all those Ruminants called Buffaloes, Bisons, and Oxen generally,) is as distinct and well characterised as any other genus in the animal kingdom, yet the facts which are at present known respecting the various species which compose it, are not sufficiently numerous to enable the naturalist to divide them into sub-genera. This is abundantly proved by the unsuccessful result of those attempts which have already been made to arrange them into minor groups. Nor can we wonder at this want of success, when we consider that even many of the species usually regarded as distinct are by no means clearly defined.

The second object, therefore, of this treatise, is (by bringing into juxta-position all the most important facts concerning the various individual specimens which have been described, and by adding several other facts of importance which have not hitherto been noticed,) to enable the naturalist to define, more correctly than has yet been done, the peculiarities of each species.

A third object is to direct the attention of travellers more particularly to this subject; in order that, by their exertions, our information upon this class of animals may be rendered more complete.

A new and important feature in the present Monograph, is the introduction of a Table of the Number of Vertebræ, carefully constructed from an examination of the actual skeletons, by which will be seen at a glance the principal osteological differences of species which have hitherto been confounded with each other. A Table of the Periods of Gestation is likewise added, which presents some equally interesting results.

Several of the descriptions have been verified by a reference to the living animals, seven specimens of which are at present (1847) in the Gardens of the Zoological Society, Regent's Park. The several Museums in the Metropolis have likewise been consulted with advantage.

I am indebted to Judge Furnam, of the United States, for some original information respecting the American Bison; and also to the late Mr. Cole, who was forty years park-keeper at Chillingham, for answers to several questions which I proposed to him on the subject of the Chillingham Cattle.

I beg to acknowledge my obligation to Mr. Catlin for kindly allowing me, not only to make extracts, but also to copy some of the outlines from his 'Letters and Notes on the North American Indians,' a work which I do not hesitate to pronounce one of the most curious and interesting which the present century has produced,—whether we regard the graphic merits of its literary or pictorial department.