Cruise of the Revenue-Steamer Corwin in Alaska and the N.W. Arctic Ocean in 1881: Botatical Notes Notes and Memoranda: Medical and Anthropological; Botanical; Ornithological. 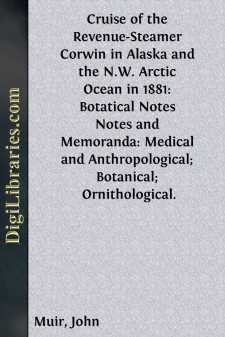 The plants named in the following notes were collected at many localities on the coasts of Alaska and Siberia, and on Saint Lawrence, Wrangel, and Herald Islands, between about latitude 54° and 71°, longitude 161° and 178°, in the course of short excursions, some of them less than an hour in length.

Inasmuch as the flora of the arctic and subarctic regions is nearly the same everywhere, the discovery of many species new to science was not to be expected. The collection, however, will no doubt be valuable for comparison with the plants of other regions.

In general the physiognomy of the vegetation of the polar regions resembles that of the alpine valleys of the temperate zones; so much so that the botanist on the coast of Arctic Siberia or America might readily fancy himself on the Sierra Nevada at a height of 10,000 to 12,000 feet above the sea.

There is no line of perpetual snow on any portion of the arctic regions known to explorers. The snow disappears every summer not only from the low sandy shores and boggy tundras but also from the tops of the mountains and all the upper slopes and valleys with the exception of small patches of drifts and avalanche-heaps hardly noticeable in general views. But though nowhere excessively deep or permanent, the snow-mantle is universal during winter, and the plants are solidly frozen and buried for nearly three-fourths of the year. In this condition they enjoy a sleep and rest about as profound as death, from which they awake in the months of June and July in vigorous health, and speedily reach a far higher development of leaf and flower and fruit than is generally supposed. On the drier banks and hills about Kotzebue Sound, Cape Thompson, and Cape Lisbourne many species show but little climatic repression, and during the long summer days grow tall enough to wave in the wind, and unfold flowers in as rich profusion and as highly colored as may be found in regions lying a thousand miles farther south.

To the botanist approaching any portion of the Aleutian chain of islands from the southward during the winter or spring months, the view is severely desolate and forbidding. The snow comes down to the water's edge in solid white, interrupted only by dark outstanding bluffs with faces too steep for snow to lie on, and by the backs of rounded rocks and long rugged reefs beaten and overswept by heavy breakers rolling in from the Pacific, while throughout nearly every month of the year the higher mountains are wrapped in gloomy dripping storm-clouds.

Nevertheless vegetation here is remarkably close and luxuriant, and crowded with showy bloom, covering almost every foot of the ground up to a height of about a thousand feet above the sea—the harsh trachytic rocks, and even the cindery bases of the craters, as well as the moraines and rough soil beds outspread on the low portions of the short narrow valleys.

On the 20th of May we found the showy Geum glaciale already in flower, also an arctostaphylos and draba, on a slope facing the south, near the harbor of Ounalaska. The willows, too, were then beginning to put forth their catkins, while a multitude of green points were springing up in sheltered spots wherever the snow had vanished. At a height of 400 and 500 feet, however, winter was still unbroken, with scarce a memory of the rich bloom of summer....