Count Bunker: being a bald yet veracious chronicle containing some further particulars of two gentlemen whose previous careers were touched upon in a tome entitled the Lunatic at Large 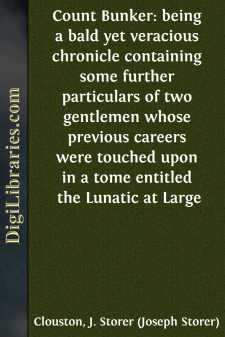 It is only with the politest affectation of interest, as a rule, that English Society learns the arrival in its midst of an ordinary Continental nobleman; but the announcement that the Baron Rudolph von Blitzenberg had been appointed attache to the German embassy at the Court of St. James was unquestionably received with a certain flutter of excitement. That his estates were as vast as an average English county, and his ancestry among the noblest in Europe, would not alone perhaps have arrested the attention of the paragraphists, since acres and forefathers of foreign extraction are rightly regarded as conferring at the most a claim merely to toleration. But in addition to these he possessed a charming English wife, belonging to one of the most distinguished families in the peerage (the Grillyers of Monkton-Grillyer), and had further demonstrated his judgment by purchasing the winner of the last year's Derby, with a view to improving the horse-flesh of his native land.

From a footnote attached to the engraving of the Baron in a Homburg hat holding the head of the steed in question, which formed the principal attraction in several print-sellers' windows in Piccadilly, one gathered that though his faculties had been cultivated and exercised in every conceivable direction, yet this was his first serious entrance into the diplomatic world. There was clearly, therefore, something unusual about the appointment; so that it was rumored, and rightly, that an international importance was to be attached to the incident, and a delicate compliment to be perceived in the selection of so popular a link between the Anglo-Saxon and the Teutonic peoples. Accordingly "Die Wacht am Rhein" was played by the Guards' band down the entire length of Ebury Street, photographs of the Baroness appeared in all the leading periodicals, and Society, after its own less demonstrative but equally sincere fashion, prepared to welcome the distinguished visitors.

They arrived in town upon a delightful day in July, somewhat late in the London season, to be sure, yet not too late to be inundated with a snowstorm of cards and invitations to all the smartest functions that remained. For the first few weeks, at least, you would suppose the Baron to have no time for thought beyond official receptions and unofficial dinners; yet as he looked from his drawing-room windows into the gardens of Belgrave Square upon the second afternoon since they had settled into this great mansion, it was not upon such functions that his fancy ran. Nobody was more fond of gaiety, nobody more appreciative of purple and fine linen, than the Baron von Blitzenberg; but as he mused there he began to recall more and more vividly, and with an ever rising pleasure, quite different memories of life in London. Then by easy stages regret began to cloud this reminiscent satisfaction, until at last he sighed—

"Ach, my dear London! How moch should I enjoy you if I were free!"

For the benefit of those who do not know the Baron either personally or by repute, he may briefly be described as an admirably typical Teuton....