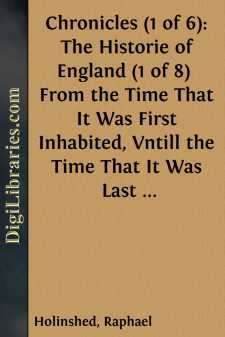 What manner of people did first inhabite this our country, which hath most generallie and of longest continuance béene knowne among all nations by the name of Britaine as yet is not certeinly knowne; neither can it be decided frГ…ВЌ whence the first inhabitants there of came, by reason of such diuersitie in iudgements as haue risen amongst the learned in this The originall of nations for the most part vncerteine. behalfe. But sith the originall in maner of all nations is doubtfull, and euen the same for the more part fabulous (that alwaies excepted which we find in the holie scriptures) I wish not any man to leane to that which shall be here set downe as to an infallible truth, sith I doo but onlie shew other mens conjectures, grounded neuerthelesse vpon likelie reasons, concerning that matter whereof there is now left but little other certeintie, or rather none at all.

Whither Britaine were an Iland at the first. Geog. com. lib. No Ilands at the first, as some coniecture. To fetch therefore the matter from the farthest, and so to stretch it forward, it séemeth by the report of Dominicus Marius Niger that in the beginning, when God framed the world, and diuided the waters apart from the earth, this Ile was then a parcell of the continent, and ioined without any separation of sea to the maine land. But this opinion (as all other the like vncerteinties) I leaue to be discussed of by the learned: howbeit for the first inhabitation of this Ile with people, I haue thought good to set downe in part, what may be gathered out of such writers as haue touched that matter, and may séeme to giue some light vnto the knowledge thereof.

In the first part of the acts of the English votaries. Britaine inhabitied before the floud. Genesis 6. Berosus ant. lib. 1. First therefore Iohn Bale our countrieman, who in his time greatlie trauelled in the search of such antiquities, dooth probablie coniecture, that this land was inhabited and replenished with people long before the floud, at that time in the which the generation of mankind (as Moses writeth) began to multiplie vpon the vniuersall face of the earth: and therfore it followeth, that as well this land was inhabited with people long before the daies of Noah, as any the other countries and parts of the world beside. But when they had once forsaken the ordinances appointed them by God, and betaken them to new waies inuented of themselues, such loosenesse of life ensued euerie where, as brought vpon them the great deluge and vniuersall floud, in the which perished as well the inhabitants of these quarters, as the residue of the race of mankind, generallie dispersed in euerie other part of the whole world, onelie Noah & his familie excepted, who by the prouidence and pleasure of almightie God was preserued from the rage of those waters, to recontinue and repaire the new generation of man of vpon earth.

Noah. In comment. super 4. lib. Berosus de antiquit. lib. 1 Annius vt suor. After the flood (as Annius de Viterbo recordeth) and reason also[Page 428] enforceth, Noah was the onlie monarch of all the world, and as the same Annius gathereth by the account of Moses in the 100....