Christianity and Greek Philosophy or, the relation between spontaneous and reflective thought in Greece and the positive teaching of Christ and His Apostles

by B. F. (Benjamin Franklin) Cocker 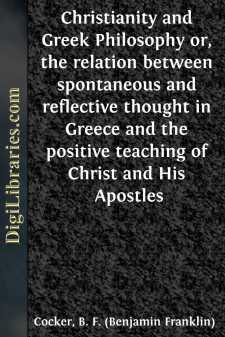 In preparing the present volume, the writer has been actuated by a conscientious desire to deepen and vivify our faith in the Christian system of truth, by showing that it does not rest solely on a special class of facts, but upon all the facts of nature and humanity; that its authority does not repose alone on the peculiar and supernatural events which transpired in Palestine, but also on the still broader foundations of the ideas and laws of the reason, and the common wants and instinctive yearnings of the human heart. It is his conviction that the course and constitution of nature, the whole current of history, and the entire development of human thought in the ages anterior to the advent of the Redeemer centre in, and can only be interpreted by, the purpose of redemption.

The method hitherto most prevalent, of treating the history of human thought as a series of isolated, disconnected, and lawless movements, without unity and purpose; and the practice of denouncing the religions and philosophies of the ancient world as inventions of satanic mischief, or as the capricious and wicked efforts of humanity to relegate itself from the bonds of allegiance to the One Supreme Lord and Lawgiver, have, in his judgment, been prejudicial to the interests of all truth, and especially injurious to the cause of Christianity. They betray an utter insensibility to the grand unities of nature and of thought, and a strange forgetfulness of that universal Providence which comprehends all nature and all history, and is yet so minute in its regards that it numbers the hairs on every human head, and takes note of every sparrow's fall, A juster method will lead us to regard the entire history of human thought as a development towards a specific end, and the providence of God as an all-embracing plan, which sweeps over all ages and all nations, and which, in its final consummation, will, through Christ, "gather together all things in one, both things which are in heaven and things which are on earth."

The central and unifying thought of this volume is that the necessary ideas and laws of the reason, and the native instincts of the human heart, originally implanted by God, are the primal and germinal forces of history; and that these have been developed under conditions which were first ordained, and have been continually supervised by the providence of God. God is the Father of humanity, and he is also the Guide and Educator of our race. As "the offspring of God," humanity is not a bare, indeterminate potentiality, but a living energy, an active reason, having definite qualities, and inheriting fundamental principles and necessary ideas which constitute it "the image and likeness of God." And though it has suffered a moral lapse, and, in the exercise of its freedom, has become alienated from the life of God, yet God has never abandoned the human race. He still "magnifies man, and sets his heart upon him." "He visits him every morning, and tries him every moment." "The inspiration of the Almighty still gives him understanding." The illumination of the Divine Logos still "teacheth man knowledge." The Spirit of God still comes near to and touches with strong emotion every human heart....