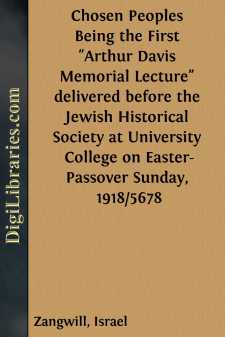 Mr. Arthur Davis, in whose memory has been founded the series of Lectures devoted to the fostering of Hebraic thought and learning, of which this is the first, was born in 1846 and died on the first day of Passover, 1906. His childhood was spent in the town of Derby, where there was then no Synagogue or Jewish minister or teacher of Hebrew. Spontaneously he developed a strong Jewish consciousness, and an enthusiasm for the Hebrew language, which led him to become one of its greatest scholars in this, or any other, country.

He was able to put his learning to good use. He observed the wise maxim of Leonardo da Vinci, "Avoid studies of which the result dies with the worker." He was not one of those learned men, of whom there are many examples—a recent and conspicuous instance was the late Lord Acton—whose minds are so choked with the accumulations of the knowledge they have absorbed that they can produce little or nothing. His output, though not prolific, was substantial. In middle life he wrote a volume on "The Hebrew Accents of the Twenty-one Books of the Bible," which has become a classical authority on that somewhat recondite subject. It was he who originated and planned the new edition of the Festival Prayer Book in six volumes, and he wrote most of the prose translations. When he died, though only two volumes out of the six had been published, he left the whole of the text complete. To Mr. Herbert M. Adler, who had been his collaborator from the beginning, fell the finishing of the great editorial task.

Not least of his services lay in the fact that he had transmitted much of his knowledge to his two daughters, who have worthily continued his tradition of Hebrew scholarship and culture.

Arthur Davis's life work, then, was that of a student and interpreter of Hebrew. It is a profoundly interesting fact that, in our age, movements have been set on foot in more than one direction for the revival of languages which were dead or dying. We see before our eyes Welsh and Irish in process of being saved from extinction, with the hope perhaps of restoring their ancient glories in poetry and prose. Such movements show that our time is not so utilitarian and materialistic as is often supposed. A similar revivifying process is affecting Hebrew. For centuries it has been preserved as a ritual language, sheltered within the walls of the Synagogue; often not fully understood, and never spoken, by the members of the congregations. Now it is becoming in Palestine once more a living and spoken language.

Hebrew is one example among many of a language outliving for purposes of ritual its use in ordinary speech. A ritual is regarded as a sacred thing, unchanging, and usually unchangeable, except as the result of some great religious upheaval. The language in which it is framed continues fixed, amid the slowly developing conditions of the workaday world. Often, indeed, the use of an ancient language, which has gradually fallen into disuse among the people, is deliberately maintained for the air of mystery and of awe which is conveyed by its use, and which has something of the same effect upon the intellect as the "dim religious light" of a cathedral has upon the emotions....