Cattle and Their Diseases Embracing Their History and Breeds, Crossing and Breeding, And Feeding and Management; With the Diseases to which They are Subject, And The Remedies Best Adapted to their Cure 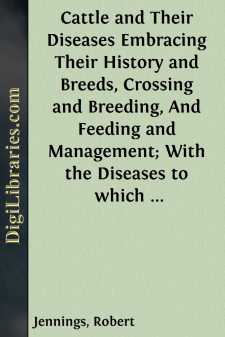 A marked interest has of late years been manifested in our country relative to the subject of breeding and rearing domestic cattle. This has not been confined to the dairyman alone. The greater portion of intelligent agriculturists have perceived the necessity of paying more attention than was formerly devoted to the improvement and perfection of breeds for the uses of the table as well. In this respect, European cattle-raisers have long taken the precedence of our own.

The gratifying favor with which the author's former publication, "The Horse and his Diseases," has been received by the public, has induced him to believe that a work, similar in spirit and general treatment, upon Cattle, would not be without interest for the agricultural community.

In this belief, the present treatise has been prepared. The author has availed himself of the labors of others in this connection; never, however, adopting results and conclusions, no matter how strongly endorsed, which have been contradicted by his own observation and experience. In a field like the one in question, assuredly, if anywhere, some degree of independent judgment will not be censured by those who are familiar with the sad consequences resulting from the attempted application of theories now universally exploded, but which in the day and generation of their originators were sanctioned and advocated by those who claimed to be magnates in this department.

Particular attention is requested to the division of "Diseases." Under this head, as in his former work, the author has endeavored to detail the symptoms of the most common ailments of cattle in such a manner that every farmer and cattle-owner can at once understand them, and also to suggest such procurable remedies as a wide experience has proved to be most efficacious.

A generous space has been devoted to the consideration of that fatal epidemic, now generally known as "Pleuro-Pneumonia," as it has manifested itself in Europe and this country, in the belief that a matter of such vital importance to the stock-raiser ought to receive a complete exposition in a work like the present. As the author's personal experience in connection with the treatment of this peculiar disease has been, perhaps, as large and varied as that of any American practitioner, he is not without the hope that his views upon the matter may prove productive of some benefit to others.

Should the present volume prove as acceptable to those interested as did his former work, the author will be abundantly satisfied that he has not mistaken in this instance the wants of the public....