Austral English A dictionary of Australasian words, phrases and usages with those aboriginal-Australian and Maori words which have become incorporated in the language, and the commoner scientific words that have had their origin in Australasia 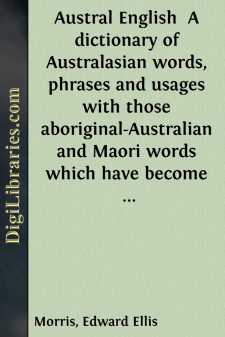 I. ORIGIN OF THE WORK.

About a generation ago Mr. Matthew Arnold twitted our nation with the fact that "the journeyman work of literature" was much better done in France—the books of reference, the biographical dictionaries, and the translations from the classics. He did not especially mention dictionaries of the language, because he was speaking in praise of academies, and, as far as France is concerned, the great achievement in that line is Littre and not the Academy's Dictionary. But the reproach has now been rolled away—<i>nous avons change tout cela</i>—and in every branch to which Arnold alluded our journeyman work is quite equal to anything in France.

It is generally allowed that a vast improvement has taken place in translations, whether prose or verse. From quarter to quarter the <i>Dictionary of National Biography</i> continues its stately progress. But the noblest monument of English scholarship is <i>The New English Dictionary on Historical Principles</i>, founded mainly on the materials collected by the Philological Society, edited by Dr. James Murray, and published at the cost of the University of Oxford. The name <i>New</i> will, however, be unsuitable long before the Dictionary is out of date. Its right name is the <i>Oxford English Dictionary</i> (`O.E.D.'). That great dictionary is built up out of quotations specially gathered for it from English books of all kinds and all periods; and Dr. Murray several years ago invited assistance from this end of the world for words and uses of words peculiar to Australasia, or to parts of it. In answer to his call I began to collect; but instances of words must be noted as one comes across them, and of course they do not occur in alphabetical order. The work took time, and when my parcel of quotations had grown into a considerable heap, it occurred to me that the collection, if a little further trouble were expended upon it, might first enjoy an independent existence. Various friends kindly contributed more quotations: and this Book is the result.

In January 1892, having the honour to be President of theSection of "Literature and the Fine Arts" at the Hobart Meetingof the Australasian Association for the Advancement of Science,I alluded to Dr. Murray's request:

A body like this Section, composed of men from different parts of scattered colonies, might render valuable help in organising the work of collecting authorities for our various peculiar words and usages. Twenty or thirty men and women, each undertaking to read certain books with the new dictionary in mind, and to note in a prescribed fashion what is peculiar, could accomplish all that is needed. Something has been done in Melbourne, but the Colonies have different words and uses of words, and this work is of a kind which might well extend beyond the bounds of a single city. At first it may seem as if our words were few, as if in the hundred years of Australian life few special usages have arisen; but a man with a philological turn of mind, who notes what he hears, will soon find the list grow....