Archeological Expedition to Arizona in 1895 Seventeenth Annual Report of the Bureau of American Ethnology to the Secretary of the Smithsonian Institution, 1895-1896, Government Printing Office, Washington, 1898, pages 519-744 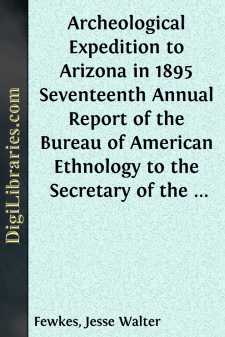 About the close of May, 1895, I was invited to make a collection of objects for the National Museum, illustrating the archeology of the Southwest, especially that phase of pueblo life pertaining to the so-called cliff houses. I was specially urged to make as large a collection as possible, and the choice of locality was generously left to my discretion.

Leaving Washington on the 25th of May, I obtained a collection and returned with it to that city on the 15th of September, having spent three months in the field. The material brought back by the expedition was catalogued under 966 entries, numbering somewhat over a thousand specimens. The majority of these objects are fine examples of mortuary pottery of excellent character, fully 500 of which are decorated.

I was particularly fortunate in my scientific collaborators. Mr F. W. Hodge, of the Bureau of American Ethnology, joined me at Sikyatki, and remained with the expedition until it disbanded, at the close of August. Much of my success in the work at that ruin was due to his advice and aid. He was constantly at the excavations, and the majority of the beautiful specimens were taken out of the graves by him. It is with the greatest pleasure that I am permitted to express my appreciation of his assistance in my archeological investigations at Sikyatki. Mr G. P. Winship, now librarian of the John Carter Brown Library at Providence, visited our camp at the ruin mentioned, and remained with us a few weeks, rendering important aid and adding an enthusiastic student to our number. Mr James S. Judd was a volunteer assistant while we were at Sikyatki, aiding me in many ways, especially in the management of our camp. I need only to refer to the beautiful drawings which accompany this memoir to show how much I am indebted to Mrs Hodge for faithful colored figures of the remarkable pottery uncovered from the Tusayan sands. My party included Mr S. Goddard, of Prescott, Arizona, who served as cook and driver, and Mr Erwin Baer, of the same city, as photographer. The manual work at the ruins was done by a number of young Indians from the East Mesa, who very properly were employed on the Moki reservation. An all too prevalent and often unjust criticism that Indians will not work if paid for their labor, was not voiced by any of our party. They gave many a weary hour's labor in the hot sun, in their enthusiasm to make the collection as large as possible.

On my return to Washington I was invited to prepare a preliminary account of my work in the field, which the Secretary of the Smithsonian Institution did me the honor to publish in his report for 1895. This report was of a very general character, and from necessity limited in pages; consequently it presented only the more salient features of my explorations.

The following account was prepared as a more exhaustive discussion of the results of my summer's work. The memoir is much more extended than I had expected to make it when I accepted the invitation to collect archeological objects for the Museum, and betrays, I fear, imperfections due to the limited time spent in the field. The main object of the expedition was a collection of specimens, the majority of which, now on exhibition in the National Museum, tell their own story regarding its success.

I am under deep obligations to the officers of the Smithsonian Institution, the National Museum, and the Bureau of American Ethnology for many kindnesses, and wish especially to express my thanks to Mr S. P. Langley, Secretary of the Smithsonian Institution, for the opportunity to study the ancient ruins of Tusayan. Nothing had a greater influence on my final decision to abandon other congenial work and undertake this, than my profound respect for the late Dr G. Brown Goode, who suggested the expedition to me and urged me to plan and undertake it.

PLAN OF THE EXPEDITION

It seemed to me in making a plan for archeological field work in 1895, that the prehistoric cliff houses, cave dwellings, and ruined pueblos of Arizona afforded valuable opportunities for research, and past experience induced me to turn my steps more especially to the northern and northeastern parts of the territory. The ruins of ancient habitations in these regions had been partially, and, I believe, unsatisfactorily explored, especially those in a limited area called Tusayan, now inhabited by the Moki or Hopi Indians. These agricultural people claim to be descendants of those who once lived in the now deserted villages of that province.

I had some knowledge of the ethnology of the Hopi, derived from several summers' field work among them, and I believed this information could be successfully utilized in an attempt to solve certain archeological questions which presented themselves. I desired, among other things, to obtain new information on the former extension, in one direction, of the ancestral abodes of certain clans of the sedentary people of Tusayan which are now limited to six pueblos in the northeastern part of the territory. In carrying out this general plan I made an examination of cliff dwellings and other ruins in Verde valley, and undertook an exploration of two old pueblos near the Hopi villages....