Applied Psychology: Driving Power of Thought Being the Third in a Series of Twelve Volumes on the Applications of Psychology to the Problems of Personal and Business Efficiency 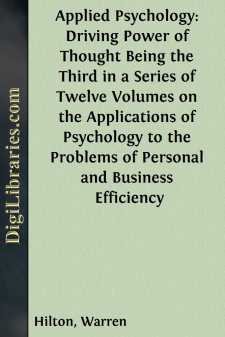 One of the greatest discoveries of modern times is the impellent energy of thought.

That every idea in consciousness is energizing and carries with it an impulse to some kind of muscular activity is a comparatively new but well-settled principle of psychology. That this principle could be made to serve practical ends seems never to have occurred to anyone until within the last few years.

Certain eminent pioneers in therapeutic psychology, such men as Prince, Gerrish, Sidis, Janet, Binet and other physician-scientists, have lately made practical use of the vitalizing influence of certain classes of ideas in the healing of disease.

Preceding books in this Course have taught that—

I. All human achievement comes about through some form of bodily activity.

II. All bodily activity is caused, controlled and directed by the mind.

III. The mind is the instrument you must employ for the accomplishment of any purpose.

The Two Types of Thought

You have learned that the fundamental processes of the mind are the Sense-Perceptive Process and the Judicial Process.

So far you have considered only the former—that is to say, sense-impressions and our perception of them. You have learned through an analysis of this process that the environment that prescribes your conduct and defines your career is wholly mental, the product of your own selective attention, and that it is capable of such deliberate molding and adjustment by you as will best promote your interests.

But the mere perception of sense-impressions, though a fundamental part of our mental life, is by no means the whole of it. The mind is also able to look at these perceptions, to assign them a meaning and to reflect upon them. These operations constitute what are called the Judicial Processes of the Mind.

The Judicial Processes of the Mind are of two kinds, so that, in the last analysis, there are, in addition to sense-perceptions, two, and only two, types of thought.

One of these types of thought is called a Causal Judgment and the other a Classifying Judgment.

A Causal Judgment interprets and explains sense-perceptions. For instance, the tiny baby's first vague notion that something, no knowing what, must have caused the impressions of warmth and whiteness and roundness and smoothness that accompany the arrival of its milk-bottle—this is a causal judgment.

The very first conclusion that you form concerning any sensation that reaches you is that something produced it, though you may not be very clear as to just what that something is. The conclusions of the infant mind, for example, along this line must be decidedly vague and indefinite, probably going no further than to determine that the cause is either inside or outside of the body....