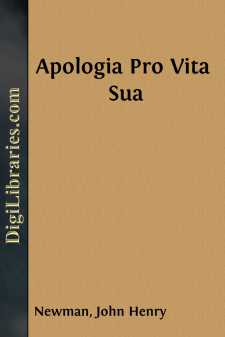 The following History of my Religious Opinions, now that it is detached from the context in which it originally stood, requires some preliminary explanation; and that, not only in order to introduce it generally to the reader, but specially to make him understand, how I came to write a whole book about myself, and about my most private thoughts and feelings. Did I consult indeed my own impulses, I should do my best simply to wipe out of my Volume, and consign to oblivion, every trace of the circumstances to which it is to be ascribed; but its original title of "Apologia" is too exactly borne out by its matter and structure, and these again are too suggestive of correlative circumstances, and those circumstances are of too grave a character, to allow of my indulging so natural a wish. And therefore, though in this new Edition I have managed to omit nearly a hundred pages of my original Volume, which I could safely consider to be of merely ephemeral importance, I am even for that very reason obliged, by way of making up for their absence, to prefix to my Narrative some account of the provocation out of which it arose.

It is now more than twenty years that a vague impression to my disadvantage has rested on the popular mind, as if my conduct towards the Anglican Church, while I was a member of it, was inconsistent with Christian simplicity and uprightness. An impression of this kind was almost unavoidable under the circumstances of the case, when a man, who had written strongly against a cause, and had collected a party round him by virtue of such writings, gradually faltered in his opposition to it, unsaid his words, threw his own friends into perplexity and their proceedings into confusion, and ended by passing over to the side of those whom he had so vigorously denounced. Sensitive then as I have ever been of the imputations which have been so freely cast upon me, I have never felt much impatience under them, as considering them to be a portion of the penalty which I naturally and justly incurred by my change of religion, even though they were to continue as long as I lived. I left their removal to a future day, when personal feelings would have died out, and documents would see the light, which were as yet buried in closets or scattered through the country.

This was my state of mind, as it had been for many years, when, in the beginning of 1864, I unexpectedly found myself publicly put upon my defence, and furnished with an opportunity of pleading my cause before the world, and, as it so happened, with a fair prospect of an impartial hearing. Taken indeed by surprise, as I was, I had much reason to be anxious how I should be able to acquit myself in so serious a matter; however, I had long had a tacit understanding with myself, that, in the improbable event of a challenge being formally made to me, by a person of name, it would be my duty to meet it. That opportunity had now occurred; it never might occur again; not to avail myself of it at once would be virtually to give up my cause; accordingly, I took advantage of it, and, as it has turned out, the circumstance that no time was allowed me for any studied statements has compensated, in the equitable judgment of the public, for such imperfections in composition as my want of leisure involved.