An interesting journal of Abner Stocking of Chatham, Connecticut detailing the distressing events of the expedition against Quebec, under the command of Col. Arnold in the year 1775 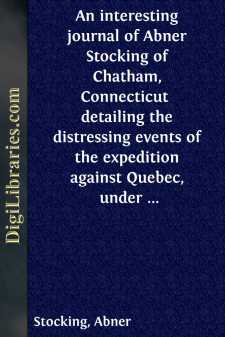 All things being in readiness for our departure, we set out from Cambridge, near Boston, on the 13th Sept. at sunset, and encamped at Mistick at eight o'clock at night. We were all in high spirits, intending to endure with fortitude, all the fatigues and hardships, that we might meet with in our march to Quebec.

September 14th. This morning we began our march at 5 o'clock and at sunset encamped at Danvers, a place twenty miles distant from Mistick.

The weather through the day was very sultry and hot for the season of the year. The country through which we passed appeared barren and but thinly inhabited.

September 15th. This morning we marched very early, and encamped at night within five miles of Newbury Port. The inhabitants who visited us in our encampment expressed many good wishes for our success in our intended enterprise.

September 16th. Zealous in the cause, and not knowing the hardships and distresses we were to encounter, we as usual began our march very early.—At eight o'clock we arrived at Newbury Port where we were to tarry several days and make preparations for our voyage. We were here to go on board vessels which we found lying ready to receive us, and carry us to the mouth of the Kennebeck. The mouth of the Kennebeck river is about thirty leagues to the eastward of Newbury Port.

September 17th. We are still at Newbury Port and are ordered to appear at a general review.

We passed the review with much honor to ourselves. We manifested great zeal and animation in the cause of liberty and went through with the manual exercise with much alacrity.

The spectators, who were very numerous, appeared much affected. They probably thought we had many hardships to encounter and many of us should never return to our parents and families.

September 18th. We this day embarked at six o'clock in the afternoon. Our fleet consisted of eleven sail, sloops and schooners. Our whole number of troops was 1100—11 companies of musketmen and three companies of riflemen. We hauled off into the road and got ready to weigh anchor in the morning if the wind should be favorable.

September 19th. This morning we got under way with a pleasant breeze, our drums beating, fifes playing and colours flying.

Many pretty Girls stood upon the shore, I suppose weeping for the departure of their sweethearts.

At eleven o'clock this day we left the entrance of the harbor and bore away for Kennebeck river. In the latter part of the night, there came on a thick fog and our fleet was separated. At break of day we found ourselves in a most dangerous situation, very near a reef of rocks. The rocks indeed appeared on all sides of us, so that we feared we should have been dashed to pieces on some of them. We were brought into this deplorable situation by means of liquor being dealt out too freely to our pilots.—Their intemperance much endangered their own lives and the lives of all the officers and soldiers on board; but through the blessing of God we all arrived safe in Kennebeck river.

September 20. This day was very pleasant, and with a gentle breeze we sailed and rowed 30 miles up the Kennebeck river. By the evening tide we floated within 6 miles of Fort Western, where we were obliged to leave our sloops and take to our batteaus.

September 21. This day we arrived at Fort Western, where we tarried until the 25th in order to make farther preparation for our voyage up the river, and our march through the wilderness....