An Inquiry into the Permanent Causes of the Decline and Fall of Powerful and Wealthy Nations. Designed To Shew How The Prosperity Of The British Empire May Be Prolonged 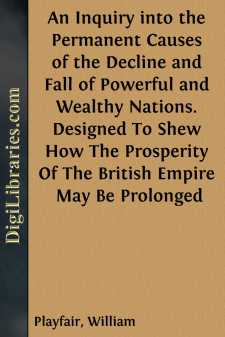 The latter inquiry is, perhaps, the more important of the two; for many nations have remained, during a long period, virtuous and happy, without rising to wealth or greatness; but there is no example of happiness or virtue residing amongst a fallen people.

In looking over the globe, if we fix our eyes on those places where wealth formerly was accumulated, and where commerce flourished, we see them, at the present day, peculiarly desolated and degraded.

From the borders of the Persian Gulf, to the shores of the Baltic Sea; from Babylon and Palmyra, Egypt, Greece, and Italy; to Spain and Portugal, and the whole circle of the Hanseatic League, we trace the same ruinous [end of page #iii] remains of ancient greatness, presenting a melancholy contrast with the poverty, indolence, and ignorance, of the present race of inhabitants, and an irresistible proof of the mutability of human affairs.

As in the hall, in which there has been a sumptuous banquet, we perceive the fragments of a feast now become a prey to beggars and banditti; if, in some instances, the spectacle is less wretched and disgusting; it is, because the banquet is not entirely over, and the guests have not all yet risen from the table.

From this almost universal picture, we learn that the greatness of nations is but of short duration. We learn, also, that the state of a fallen people is infinitely more wretched and miserable than that of those who have never risen from their original state of poverty. It is then well worth while to inquire into the causes of so terrible a reverse, that we may discover whether they are necessary, or only natural; and endeavour, if possible, to find the means by which prosperity may be lengthened out, and the period of humiliation procrastinated to a distant day.

Though the career of prosperity must necessarily have a termination amongst every people, yet there is some reason to think that the degradation, which naturally follows, and which has always followed hitherto, may be [end of page #iv] averted; whether it may be, or may not be so, is the subject of the following Inquiry; which, if it is of importance to any nation on earth, must be peculiarly so to England; a nation that has risen, both in commerce and power, so high above the natural level assigned to it by its population and extent. A nation that rises still, but whose most earnest wish ought to be rather directed to preservation than extension; to defending itself against adversity rather than seeking still farther to augment its power.

With regard to the importance of the Inquiry, there cannot be two opinions; but, concerning its utility and success, opinions may be divided....