An Historical Relation of the Island Ceylon in the East Indies Together with an Account of the Detaining in Captivity the Author and Divers other Englishmen Now Living There, and of the Author's Miraculous Escape 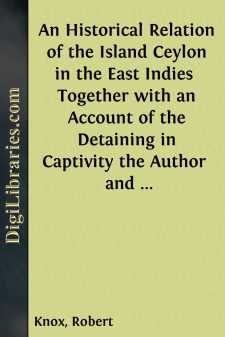 CHAP. I. A general Description of the Island.

How this Island lyes with respect unto me Neighbouring Countries, I shall not speak at all, that being to be seen in our ordinary Sea-Cards, which describe those Parts; and but little concerning the Maritime parts of it, now under the Jurisdiction of the Dutch: my design being to relate such things onely that are new and unknown unto these Europæan Nations. It is the Inland Countrey therefore I chiefly intend to write of which is yet an hidden Land even to the Dutch themselves that inhabit upon the Island. For I have seen among them a fair large Map of this Place, the best I believe extant, yet very faulty: the ordinary Maps in use among us are much more so; I have procured a new one to be drawn, with as much truth and exactness as I could, and his Judgment will not be deemed altogether inconsiderable, who had for Twenty Years Travelled about the Iland, and knew almost every step of those Parts, especially, that most want describing.

I begin with the Sea-Coasts. Of all which the Hollander is Master: On the North end the chief places are Jafnipatan, and the Iland of Manaur. On the East side Trenkimalay, and Batticalow. To the South is the City of Point de Galle. On the West the City of Columbo, so called from a Tree the Natives call Ambo, (which bears the Mango-fruit) growing in that place; but this never bare fruit, but onely leaves, which in their Language is Cola> and thence they called the Tree Colambo: Page 2which the Christians in honour of Columbus turned to Columbo. It is the chief City on the Sea-coasts where the chief Governour hath his residence. On this side also is Negumba, and Colpentine. All these already mentioned are strong fortified places: There are besides many other smaller Forts and Fortifications. All which, with considerable Territories, to wit, all round bordering upon the Sea-coasts, belong to the Dutch Nation.

A general division of the Inland Countrey.I proceed to the Inland-Country, being that that is now under the King of Cande. It is convenient that we first understand, that this land is divided into greater or less shares or parts. The greater divisions give me leave to call Provinces, and the less Counties, as resembling ours in England, tho not altogether so big. On the North parts lyes the Province of Nourecalava, consisting of five lesser Divisions or Counties; the Province also of Hotcourly (signifying seven Counties:) it contains seven Counties. On the Eastward is Mautaly, containing three Counties. There are also lying on that side Tammanquod, Bintana, Vellas, Paunoa, these are single Counties. Ouvah also containing three Counties. In this Province are Two and thirty of the Kings Captains dwelling with their Soldiers. In the Midland within those already mentioned lye Wallaponahoy (it signifies Fifty holes or vales which describe the nature of it, being nothing but Hills and Valleys,) Poncipot, (signifying five hundred Souldiers.) Goddaponahoy, (signifying fifty pieces of dry Land;) Hevoihattay (signifying sixty Souldiers,) Cote-mul, Horsepot (four hundred Souldiers.) Tunponahoy (three fifties.) Oudanour (it signifies the Upper City,) where I lived last and had Land....