An Assessment of the Consequences and Preparations for a Catastrophic California Earthquake: Findings and Actions Taken Prepared By Federal Emergency Management Agency 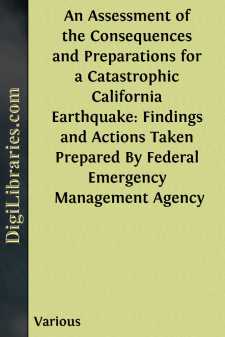 CHAPTER I EXECUTIVE SUMMARY OF FINDINGS, ISSUES, AND ACTIONS

After viewing the destruction wrought by the eruption of Mt. St. Helens in Washington State in May 1980, President Carter became concerned about the impacts of a similar event of low probability but high damage potential, namely a catastrophic earthquake in California, and the state of readiness to cope with the impacts of such an event.

As a result of the President's concern, an ad hoc committee of the National Security Council was formed to conduct a government review of the consequences of, and preparation for such an event. In addition to the Federal Emergency Management Agency, the Committee included representatives from the Office of Science and Technology Policy, the United States Geological Survey of the Department of the Interior, the Department of Defense, the Department of Transportation, and the National Communications System, at the Federal level; State of California agencies and California local governments at the State and local levels; and consultants from the private sector. During the summer of 1980, the participants in this review prepared working papers on relevant issues and problem areas for the consideration of the ad hoc committee. Pertinent facts, conclusions and recommendations were reviewed with the Governor of the State of California. The President reviewed the ad hoc committee's findings and approved the recommendations for Federal action. This report summarizes the results of the assessment and notes these actions.

A number of Federal legislative and administrative actions have been taken to bring about, in the near future, an increased capability to respond to such an event. The Earthquake Hazards Reduction Act of 1977 (P.L. 95-124) authorizes a coordinated and structured program to identify earthquake risks and prepare to lessen or mitigate their impacts by a variety of means. The coordination of this program, the National Earthquake Hazards Reduction Program (NEHRP), is the responsibility of the Federal Emergency Management Agency (FEMA), which is charged with focusing Federal efforts to respond to emergencies of all types and lessen their impacts before they occur. The NEHRP has six high-priority thrusts:

Overall coordination of Federal departments and agencies' programs Maintenance of a comprehensive program of research and development for earthquake prediction and hazards mitigation Leadership and support of the Federal Interagency Committee on Seismic Safety in Construction as it develops seismic design and construction standards for use in Federal projects Development of response plans and assistance to State and local governments in the preparation of their plans Analysis of the ability of financial institutions to perform their functions after a creditable prediction of an earthquake as well as after an event, together with an exploration of the feasibility of using these institutions to foster hazard reduction An examination of the appropriate role of insurance in mitigating the impacts of earthquakes....
Show more
Show less