Americanism Contrasted with Foreignism, Romanism, and Bogus Democracy in the Light of Reason, History, and Scripture; In which Certain Demagogues in Tennessee, and Elsewhere, are Shown Up in Their True Colors 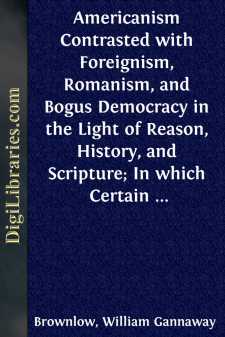 For the last twenty-five years, the writer of this work has employed much of his time in the reading and study of the controversy between Roman Catholics and Protestants. And those who have been subscribers to the paper he has edited and published for the last seventeen years, will bear him witness that he has kept up a fierce and unceasing fire against that dangerous and immoral Corporation, claiming the right to be called the Holy Catholic Church. This he has done, and still continues to do, because he believes firmly that the system of Popery, as taught in the standards of the Church of Rome, as enforced by her Bishops and Priests, and as believed and practised by the great body of Romanists, both in Europe and America, is at war with the true religion taught in the Bible, and is injurious to the public and private morals of the civilized world; and, if unchecked, will overturn the civil and religious liberties of the United States. Such, he believes, is its tendency and the design of its leaders.

Popery is deceitful in its character; and the design of this brief work is, in part, to drag it forward into the light of the middle of the nineteenth century, to strip the flimsy vizor off its face, and to bring it, with all its abuses, corruptions, and hypocritical Protestant advocates, before the bar of enlightened public opinion, for judgment in the case. Roman Catholics misrepresent their own creed, their Church, and its corrupt institutions. The most revolting, wicked, and immoral features of their holy and immutable system, are kept out of sight by its corrupt Clergy, and Jesuitical teachers; while, with a purpose to deceive, a Protestant sense is attached to most of their doctrines and peculiarities. By this vile means, they designedly misrepresent themselves, and impose on the public, by inducing charitable and uninformed persons to believe that they are not as profligate as they are represented to be. This game has been played with a bold hand in Knoxville, for the last twelve months, and it is being played in every city and town in the South and West, where Romanism is being planted. One object, then, of this epitomized work, setting forth the boastings, threats, and disclosures of leading Catholic organs and Bishops, as to their real principles and designs upon this country, suffered to go forth in their more excited moments, or unguarded hours, is, to spread before the people, in a cheap form, true Popery, and to strip it of its Protestant garb, which it has for the time being assumed.

An additional reason for bringing out this publication, at this particular time, is, to expose a corrupt bargain entered into by the leaders of the Catholic Church, and the leaders of a corrupt and designing political party, falsely called the Democratic party. One of the most alarming "signs of the times" is, that while Protestant ministers, of different persuasions, only two brief years ago, could preach with power and eloquence against the dogmas and corrupting tendencies of Romanism, and pass out of the doors of their churches, receiving the compliments and extravagant praises of their entire congregations, let one of them now dare to hold up this Corporation as a dangerous foreign enemy—let him warn his charge against the influence of Popery, or but only designate the Catholic Hierarchy as the "man of sin" described in the Scriptures, and one half of his congregation are grossly insulted: they charge him with meddling in politics; and, by way of resentment, they will either not hear him again, or they will starve him out, by refusing to contribute to his support...!