Aids to the Study of the Maya Codices Sixth Annual Report of the Bureau of Ethnology to the Secretary of the Smithsonian Institution, 1884-85, Government Printing Office, Washington, 1888, pages 253-372 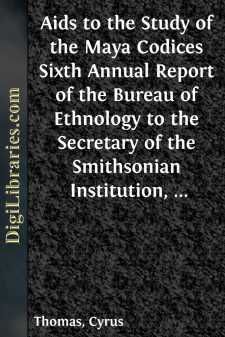 The object of this paper is to present to students of American paleography a brief explanation of some discoveries, made in regard to certain Maya codices, which are not mentioned in my previous papers relating to these aboriginal manuscripts.

It is apparent to every one who has carefully studied these manuscripts that any attempt to decipher them on the supposition that they contain true alphabetic characters must end in failure. Although enough has been ascertained to render it more than probable that some of the characters are phonetic symbols, yet repeated trials have shown beyond any reasonable doubt that Landa’s alphabet furnishes little or no aid in deciphering them, as it is evidently based on a misconception of the Maya graphic system. If the manuscripts are ever deciphered it must be by long and laborious comparisons and happy guesses, thus gaining point by point and proceeding slowly and cautiously step by step. Accepting this as true, it will be admitted that every real discovery in regard to the general signification or tenor of any of these codices, or of any of their symbols, characters, or figures, or even in reference to their proper order or relation to one another, will be one step gained toward the final interpretation. It is with this idea in view that the following pages have been written and are now presented to the students of American paleography.

It is impracticable to present fac simile copies of all the plates and figures referred to, but it is taken for granted that those sufficiently interested in this study to examine this paper have access to the published fac similes of these aboriginal documents.

THE NUMERALS IN THE DRESDEN CODEX.

Before entering upon the discussion of the topic indicated it may be well to give a brief notice of the history and character of this aboriginal manuscript, quoting from Dr. Förstemann’s introduction to the photolithographic copy of the codex, he having had an opportunity to study the original for a number of years in the Royal Public Library of Dresden, of which he is chief librarian:

“Unfortunately, the history of the manuscript begins no further back than 1739. The man to whom we owe the discovery and perhaps the preservation of the codex was Johann Christian Götze, son of an evangelical pastor, born at Hohburg, near Wurzen, in the electorate of Saxony. He became a Catholic, and received his education first at Vienna, then in Rome; became first chaplain of the King of Poland and elector of Saxony; later on, papal prothonotary; presided over the Royal Library at Dresden from 1734, and died holding this position, greatly esteemed for learning and integrity, July 5, 1749. This sketch is taken from his obituary notice in Neue Zeitungen von gelehrten Sachen, Nr. 62, Leipzig, 1749. In his capacity as librarian he went to Italy four times, and brought thence rich collections of books and manuscripts for the Dresden library. One of these journeys took place in 1739, and concerning its literary results we have accurate information from a manuscript, in Götze’s handwriting, which is found in the archives of the Royal Public Library, under A, Vol. II, No. 10, and bears the title: ‘Books consigned to me for the Royal Library in January, 1740.’ Under No. 300 we read: ‘An invaluable Mexican book with hieroglyphic figures.’ This is the same codex which we here reproduce.

“Götze also was the first to bring the existence of the manuscript to public notice. In 1744 he published at Dresden The Curiosities of the Royal Library at Dresden, First Collection. As showing what value Götze attributed to this manuscript, the very first page of the first volume of this work, which is of great merit and still highly useful, begins as follows: ‘1. A Mexican book with unknown characters and hieroglyphic figures, written on both sides and painted in all sorts of colors, in long octavo, laid orderly in folds of 39 leaves, which, when spread out lengthwise, make more than 6 yards.’

“Götze continues speaking of this book from page 1 to 5, adding, however, little of moment, but expatiating on Mexican painting and hieroglyphic writing in general. On page 4 he says:

“‘Our royal library has this superiority over all others, that it possesses this rare treasure. It was obtained a few years ago at Vienna from a private person, for nothing, as being an unknown thing. It is doubtless from the personal effects of a Spaniard, who had either been in Mexico himself or whose ancestors had been there.’

“‘In the Vatican library there are some leaves of similar Mexican writing, as stated by Mr....