Address by Honorable William C. Redfield, Secretary of Commerce at Conference of Regional Chairmen of the Highway Transport Committee Council of National Defense 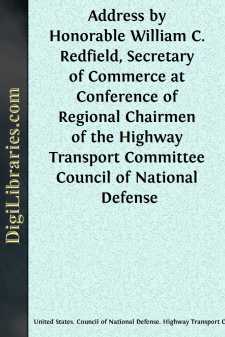 Mr. Chapin and Gentlemen: It would be a truism to say that I have always been interested in transportation. It has always been a subject of keen interest to me, I presume, because I was born with it. By the fortune of birth I came to live in a region where transportation has been through every one of its stages in this country. If you go back into the history of the Colonies, you will find the two first lines of through transportation in America were east and west—the St. Lawrence River and the Lakes—while for over a century the one great central north and south line was the Hudson River, Lake George, and Lake Champlain. In that entire length from the St. Lawrence to New York Harbor there was but about 13 miles that could not be traveled by water with such boats as they used. You will recall that great historic events of our early history centered about this transportation line. Burgoyne's surrender, Arnold's treason, the great contests of the French wars, Macdonough's victory on Lake Champlain were all associated with this water route. Such names as Montcalm, Schuyler, and Champlain are linked to it. Historically, it is true both for war and peace that transportation has been formative and controlling in our national life. One of the early evidences of the growth of transportation in this country, and therefore of our national progress, was the act of connecting the Great Lakes by the Erie Canal with the Hudson River.

The largest number of railroad tracks paralleling any navigable stream follows to-day the line of the Hudson. There are six much of the way—four tracks on one side and two on the other. I am going to make that historical line of water and rail transportation the basis for a little study with you, to see what the normal development of transportation is, and whether, as I believe, the particular form that concerns you is a natural outgrowth of all that has gone before. If it is so it is here to stay. If in the process of transportation evolution we have reached the normal use of the highway, together with the waterway and the railway, then you are doing a constructive work for your country. But if that work is not normal, if you are trying to impose upon the body politic something strange and artificial, then your work will, and ought to, fail.

The early transportation in the Hudson River Valley was by sloop. The history of the river is full of the traditions from the old sloop days, when it was sometimes five and sometimes nine days from New York to Albany by water....