Act, Declaration, & Testimony for the Whole of our Covenanted Reformation, as Attained to, and Established in Britain and Ireland; Particularly Betwixt the Years 1638 and 1649, Inclusive

by The Reformed Presbytery 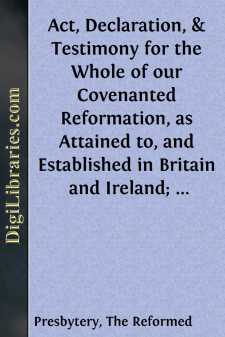 The Presbytery, soon after their erection, being convinced of the expediency and necessity of emitting a judicial testimony, to discover to the world the principles upon which, as a judicatory of the Lord Jesus Christ, they stood, in opposition to the different, so called, judicatories in the land; together with the agreeableness of these principles to the Word of God, the only rule of faith and practice, and to the covenanted constitution of the church of Scotland in her purest periods; did therefore, after a proposal for said effect, agree in appointing one of their number to prepare a draft of this kind to be laid before them, who, after sundry delays, to their grief of mind, at once cut off their hopes of all assistance from him, in that or any other particular, by laying himself obnoxious to the censures of the church; which the presbytery, in duty both to him, to God, and to his people, were obliged to put in execution against him, while he, in contempt of that ordinance, and other means used for his conviction and recovery, obstinately persists in his impenitency and defection. And although the presbytery, few in number, were thus diminished, yet, being still resolved to prosecute their former design, they renewed their appointment upon another brother, who, in consequence of his undertaking, was allowed a cessation from his other public work, in order to expedite the proposed draft: and now, when nothing was expected that should retard the finishing of such a necessary work, the lamentable fire of division, that had long been smothered, unhappily broke forth into a violent flame, whereby the presbytery was rent asunder, and that brother, on whom the appointment was formerly laid, happening to be of the separating party, a second stop was not only put to the publication of this testimony, but the presbytery, from the absence of a brother removed to a distant part of the world, together with the paucity of their number, were almost wholly discouraged from attempting again what they had been oftener than once disappointed in.

But notwithstanding of the above, with many other difficulties which we shall not at present take notice of, the presbytery, still considering, that, even in their present circumstances, when their number is few and despicable, their adversaries many, and such as are in repute in the world, whereby the opposition made to them, and the conspiracy formed against the covenanted testimony of the church of Scotland maintained by them, must needs be strong; there is yet a gracious door of opportunity left open for them to attempt, in their judicative capacity, the prosecution and accomplishment of the necessary work formerly proposed; and which they could not but judge the Lord still called them unto, while after all the above-mentioned breaches made upon them, he still continued to give them a nail in his holy place, and a wall in Judah and Jerusalem, Ezra ix, 8, 9, they therefore again laid their appointments upon some others to prepare a draft of An Act, Declaration, and Testimony, &c., and which, under the favor of Divine Providence, has at length been finished and laid before the presbytery....