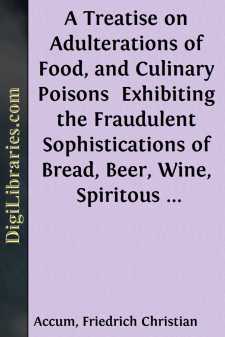 Of all the frauds practised by mercenary dealers, there is none more reprehensible, and at the same time more prevalent, than the sophistication of the various articles of food.

This unprincipled and nefarious practice, increasing in degree as it has been found difficult of detection, is now applied to almost every commodity which can be classed among either the necessaries or the luxuries of life, and is carried on to a most alarming extent in every part of the United Kingdom.

It has been pursued by men, who, from the magnitude and apparent respectability of their concerns, would be the least obnoxious to public suspicion; and their successful example has called forth, from among the retail dealers, a multitude of competitors in the same iniquitous course.

To such perfection of ingenuity has this system of adulterating food arrived, that spurious articles of various kinds are every where to be found, made up so skilfully as to baffle the discrimination of the most experienced judges.

Among the number of substances used in domestic economy which are now very generally found sophisticated, may be distinguished—tea, coffee, bread, beer, wine, spiritous liquors, salad oil, pepper, vinegar, mustard, cream, and other articles of subsistence.

Indeed, it would be difficult to mention a single article of food which is not to be met with in an adulterated state; and there are some substances which are scarcely ever to be procured genuine.

Some of these spurious compounds are comparatively harmless when used as food; and as in these cases merely substances of inferior value are substituted for more costly and genuine ingredients, the sophistication, though it may affect our purse, does not injure our health. Of this kind are the manufacture of factitious pepper, the adulterations of mustard, vinegar, cream, &c. Others, however, are highly deleterious; and to this class belong the adulterations of beer, wines, spiritous liquors, pickles, salad oil, and many others.

There are particular chemists who make it a regular trade to supply drugs or nefarious preparations to the unprincipled brewer of porter or ale; others perform the same office to the wine and spirit merchant; and others again to the grocer and the oilman. The operators carry on their processes chiefly in secresy, and under some delusive firm, with the ostensible denotements of a fair and lawful establishment.

These illicit pursuits have assumed all the order and method of a regular trade; they may severally claim to be distinguished as an art and mystery; for the workmen employed in them are often wholly ignorant of the nature of the substances which pass through their hands, and of the purposes to which they are ultimately applied.

To elude the vigilance of the inquisitive, to defeat the scrutiny of the revenue officer, and to ensure the secresy of these mysteries, the processes are very ingeniously divided and subdivided among individual operators, and the manufacture is purposely carried on in separate establishments. The task of proportioning the ingredients for use is assigned to one individual, while the composition and preparation of them may be said to form a distinct part of the business, and is entrusted to another workman. Most of the articles are transmitted to the consumer in a disguised state, or in such a form that their real nature cannot possibly be detected by the unwary....