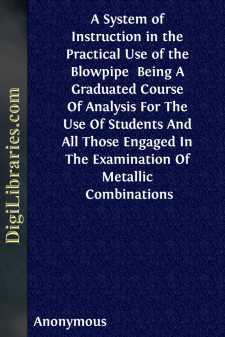 Part First. THE USE OF THE BLOWPIPE.

Perhaps during the last fifty years, no department of chemistry has been so enriched as that relating to analysis by means of the Blowpipe.

Through the unwearied exertions of men of science, the use of this instrument has arrived to such a degree of perfection, that we have a right to term its use, "Analysis in the dry way," in contradistinction to analysis "in the wet way." The manipulations are so simple and expeditious, and the results so clear and characteristic, that the Blowpipe analysis not only verifies and completes the results of analysis in the wet way, but it gives in many cases direct evidences of the presence or absence of many substances, which would not be otherwise detected, but through a troublesome and tedious process, involving both prolixity and time; for instance, the detection of manganese in minerals.

Many substances have to go through Blowpipe manipulations before they can be submitted to an analysis in the wet way. The apparatus and reagents employed are compendious and small in number, so that they can be carried easily while on scientific excursions, a considerable advantage for mineralogists and metallurgists.

The principal operations with the Blowpipe may be explained briefly as follows:

(a.) By Ignition is meant the exposure of a substance to such a degree of heat, that it glows or emits light, or becomes red-hot. Its greatest value is in the separation of a volatile substance from one less volatile, or one which is entirely fixed at the temperature of the flame. In this case we only take cognizance of the latter or fixed substance, although in many instances we make use of ignition for the purpose of changing the conditions of a substance, for example, the sesquioxide of chromium (Cr2O3) in its insoluble modification; and as a preliminary examination for the purpose of ascertaining whether the subject of inquiry be a combination of an organic or inorganic nature.

The apparatus used for this purpose are crucibles of platinum or silver, platinum foil, a platinum spoon, platinum wire or tongs, charcoal, glass tubes, and iron spoons.

(b.) Sublimation is that process by which we convert a solid substance into vapor by means of a strong heat. These vapors are condensed by refrigeration into the solid form. It may be termed a distillation of a solid substance. Sublimation is of great consequence in the detection of many substances; for instance, arsenic, antimony, mercury, etc.

The apparatus used for the purposes of sublimation consist of glass tubes closed at one end.

(c.) Fusion.—Many substances when exposed to a certain degree of heat lose their solid form, and are converted into a liquid. Those substances which do not become converted into the liquid state by heat, are said to be infusible. It is a convenient classification to arrange substances into those which are fusible with difficulty, and those which are easily fusible. Very often we resort to fusion for the purpose of decomposing a substance, or to cause it to enter into other combinations, by which means it is the more readily detected....