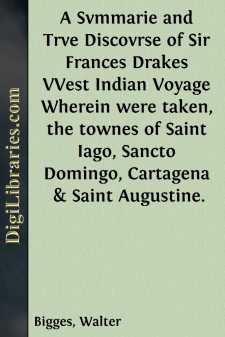 Right Honorable, hauing by chaunce recouered of late into my handes (after I had once lost the same) a copie of the Discourse of our late West Indian Voyage, which was begun by Captaine Bigges; who ended his life in the said voyage after our departure from Cartagena, the same being afterwardes finished (as I thinke) by his Lieutenant Maister Croftes, or some other, I know not well who. Now finding therein a most true report of the seruices and other matters which happened in the said voyage, the sight whereof is wonderfully desired of manie honest and well disposed persons. I haue presumed to recommend the publishing thereof, vnto your Lordships protection and fauour, for these two causes. The one, for that your Lordships honourable disposition is in the knowledge of all men that know your selfe, most thirstingly affected to embrace in your owne person, the brauest enterprises, if the time would once afford anie such fit occasion, as might be agreeable to her Maiesties resolution: who wisely (and long may she do it) gouerneth all thinges to the greatest aduantage of her selfe and people. The other, because my selfe hauing bene a member in the said actions, and was Lieutenant of Maister Carleils owne companie, whereby I can well assure the truth of this report: I thought it my bounden duetie, hauing professed my seruice to your Lordship before all men, to dedicate the same rather vnto your Lordship then vnto any other. And although it be now a yeare and a halfe sithence the voyage ended, whereby some man will say, that it is now no new matter: yet the present time considered, how doubtfull some of our meaner sort of people are of the Spanish preparations, I thinke this Discourse a verie fit thing to be published, that they may see what great victories a fewe English men haue made vpon great numbers of the Spaniardes, euen at home in their owne Countries. The beholding whereof will much encourage those, who by fame and bare wordes are made to doubt much more then there is cause why they should. Vpon which point, as there may be much said: so my selfe being no Discourser, do desire to be held excused therein; therefore doe onely commend the trueth of this report vnto your Lordship: which will be also auowed by diuers Captaines that were in the said voyage. And so in all humblenesse do take my leaue, readie to do your Lordship all faithfull seruice.

¶ The Reader must vnderstand, that this Discourse was dedicated, and intended to haue bene Imprinted somewhat before the comming of the Spanish Fleete vpon our coast of England: but by casualtie the same was forgotten and slacked for a time of some better

The Order and maner for the true placingof the Mappes in this Booke.