A Study Of The Textile Art In Its Relation To The Development Of Form And Ornament Sixth Annual Report of the Bureau of Ethnology to the Secretary of the Smithsonian Institution, 1884-'85, Government Printing Office, Washington, 1888, (pages 189-252) 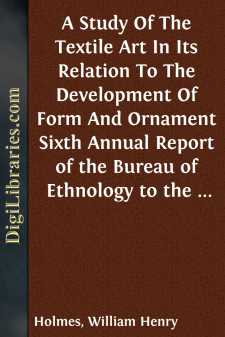 The textile art is one of the most ancient known, dating back to the very inception of culture. In primitive times it occupied a wide field, embracing the stems of numerous branches of industry now expressed in other materials or relegated to distinct systems of construction. Accompanying the gradual narrowing of its sphere there was a steady development with the general increase of intelligence and skill so that with the cultured nations of to-day it takes an important, though unobtrusive, place in the hierarchy of the arts.

Woven fabrics include all those products of art in which the elements or parts employed in construction are largely filamental and are combined by methods conditioned chiefly by their flexibility. The processes employed are known by such terms as interlacing, plaiting, netting, weaving, sewing, and embroidering.

The materials used at first are chiefly filiform vegetal growths, such as twigs, leaves, roots, and grasses, but later on filiform and then fibrous elements from all the kingdoms of nature, as well as numerous artificial preparations, are freely used. These are employed in the single, doubled, doubled and twisted, and plaited conditions, and are combined by the hands alone, by the hands assisted by simple devices, by hand looms, and finally in civilization by machine looms.

The products are, first, individual structures or articles, such as shelters, baskets, nets, and garments, or integral parts of these; and, second, "piece" goods, such as are not adapted to use until they are cut and fitted. In earlier stages of art we have to deal almost exclusively with the former class, as the tailor and the house furnisher are evolved with civilization.

In their bearing upon art these products are to be studied chiefly with reference to three grand divisions of phenomena, the first of which I shall denominate constructive, the second functional, and the third esthetic. The last class, with which this paper has almost exclusively to deal, is composed mainly of what may be called the superconstructive and superfunctional features of the art and includes three subdivisions of phenomena, connected respectively with (1) form, (2) color, and (3) design. Esthetic features of form are, in origin and manifestation, related to both function and construction; color and design, to construction mainly. In the following study separate sections are given to each of these topics.

It is fortunate perhaps that in this work I am restricted to the products of rather primitive stages of culture, as I have thus to deal with a limited number of uses, simple processes, and simple shapes. In the advanced stages of art we encounter complex phenomena, processes, and conditions, the accumulation of ages, through which no broad light can fall upon the field of vision.

In America there is a vast body of primitive, indigenous art having no parallel in the world. Uncontaminated by contact with the complex conditions of civilized art, it offers the best possible facilities for the study of the fundamental principles of esthetic development....