A Study of Pueblo Architecture: Tusayan and Cibola Eighth Annual Report of the Bureau of Ethnology to the Secretary of the Smithsonian Institution, 1886-1887, Government Printing Office, Washington, 1891, pages 3-228 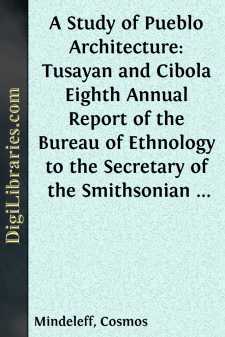 The remains of pueblo architecture are found scattered over thousands of square miles of the arid region of the southwestern plateaus. This vast area includes the drainage of the Rio Pecos on the east and that of the Colorado on the west, and extends from central Utah on the north beyond the limits of the United States southward, in which direction its boundaries are still undefined.

The descendants of those who at various times built these stone villages are few in number and inhabit about thirty pueblos distributed irregularly over parts of the region formerly occupied. Of these the greater number are scattered along the upper course of the Rio Grande and its tributaries in New Mexico; a few of them, comprised within the ancient provinces of Cibola and Tusayan, are located within the drainage of the Little Colorado. From the time of the earliest Spanish expeditions into the country to the present day, a period covering more than three centuries, the former province has been often visited by whites, but the remoteness of Tusayan and the arid and forbidding character of its surroundings have caused its more complete isolation. The architecture of this district exhibits a close adherence to aboriginal practices, still bears the marked impress of its development under the exacting conditions of an arid environment, and is but slowly yielding to the influence of foreign ideas.

The present study of the architecture of Tusayan and Cibola embraces all of the inhabited pueblos of those provinces, and includes a number of the ruins traditionally connected with them. It will be observed by reference to the map that the area embraced in these provinces comprises but a small portion of the vast region over which pueblo culture once extended.

This study is designed to be followed by a similar study of two typical groups of ruins, viz, that of Canyon de Chelly, in northeastern Arizona, and that of the Chaco Canyon, of New Mexico; but it has been necessary for the writer to make occasional reference to these ruins in the present paper, both in the discussion of general arrangement and characteristic ground plans, embodied in Chapters II and III and in the comparison by constructional details treated in Chapter IV, in order to define clearly the relations of the various features of pueblo architecture. They belong to the same pueblo system illustrated by the villages of Tusayan and Cibola, and with the Canyon de Chelly group there is even some trace of traditional connection, as is set forth by Mr. Stephen in Chapter I. The more detailed studies of these ruins, to be published later, together with the material embodied in the present paper, will, it is thought, furnish a record of the principal characteristics of an important type of primitive architecture, which, under the influence of the arid environment of the southwestern plateaus, has developed from the rude lodge into the many-storied house of rectangular rooms. Indications of some of the steps of this development are traceable even in the architecture of the present day....