A Social History of the American Negro Being a History of the Negro Problem in the United States. Including A History and Study of the Republic of Liberia 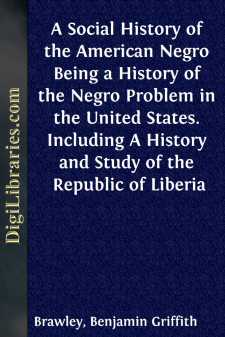 CHAPTER I THE COMING OF NEGROES TO AMERICA 1. African Origins

An outstanding characteristic of recent years has been an increasing recognition of the cultural importance of Africa to the world. From all that has been written three facts are prominent: (1) That at some time early in the Middle Ages, perhaps about the seventh century, there was a considerable infiltration of Arabian culture into the tribes living below the Sahara, something of which may to-day most easily be seen among such people as the Haussas in the Soudan and the Mandingoes along the West Coast; (2) That, whatever influences came in from the outside, there developed in Africa an independent culture which must not be underestimated; and (3) That, perhaps vastly more than has been supposed, this African culture had to do with early exploration and colonization in America. The first of these three facts is very important, but is now generally accepted and need not here detain us. For the present purpose the second and third demand more attention.

The development of native African art is a theme of never-ending fascination for the ethnologist. Especially have striking resemblances between Negro and Oceanian culture been pointed out. In political organization as well as certain forms of artistic endeavor the Negro people have achieved creditable results, and especially have they been honored as the originators of the iron technique. It has further been shown that fetichism, which is especially well developed along the West Coast and its hinterland, is at heart not very different from the manitou beliefs of the American Indians; and it is this connection that furnishes the key to some of the most striking results of the researches of the latest and most profound student of this and related problems.

From the Soudan radiated a culture that was destined to affect Europe and in course of time to extend its influence even beyond the Atlantic Ocean. It is important to remember that throughout the early history of Europe and up to the close of the fifteenth century the approach to the home of the Negro was by land. The Soudan was thought to be the edge of the then known world; Homer speaks of the Ethiopians as "the farthest removed of men, and separated into two divisions." Later Greek writers carry the description still further and speak of the two divisions as Eastern and Western—the Eastern occupying the countries eastward of the Nile, and the Western stretching from the western shores of that river to the Atlantic Coast. "One of these divisions," says Lady Lugard, "we have to acknowledge, was perhaps itself the original source of the civilization which has through Egypt permeated the Western world.... When the history of Negroland comes to be written in detail, it may be found that the kingdoms lying toward the eastern end of the Soudan were the home of races who inspired, rather than of races who received, the traditions of civilization associated for us with the name of ancient Egypt."

If now we come to America, we find the Negro influence upon the Indian to be so strong as to call in question all current conceptions of American archæology and so early as to suggest the coming of men from the Guinea Coast perhaps even before the coming of Columbus. The first natives of Africa to come were Mandingoes; many of the words used by the Indians in their daily life appear to be not more than corruptions or adaptations of words used by the tribes of Africa; and the more we study the remains of those who lived in America before 1492, and the far-reaching influence of African products and habits, the more must we acknowledge the strength of the position of the latest thesis....