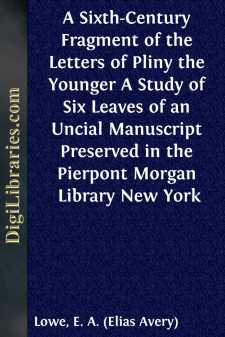 T HE Pierpont Morgan Library, itself a work of art, contains masterpieces of painting and sculpture, rare books, and illuminated manuscripts. Scholars generally are perhaps not aware that it also possesses the oldest Latin manuscripts in America, including several that even the greatest European libraries would be proud to own. The collection is also admirably representative of the development of script throughout the Middle Ages. It comprises specimens of the uncial hand, the half-uncial, the Merovingian minuscule of the Luxeuil type, the script of the famous school of Tours, the St. Gall type, the Irish and Visigothic hands, and the Beneventan and Anglo-Saxon scripts.

Among the oldest manuscripts of the library, in fact the oldest, is a hitherto unnoticed fragment of great significance not only to palaeographers, but to all students of the classics. It consists of six leaves of an early sixth-century manuscript of the Letters of the younger Pliny. This new witness to the text, older by three centuries than the oldest codex heretofore used by any modern editor, has reappeared in this unexpected quarter, after centuries of wandering and hiding. The fragment was bought by the late J. Pierpont Morgan in Rome, in December 1910, from the art dealer Imbert; he had obtained it from De Marinis, of Florence, who had it from the heirs of the Marquis Taccone, of Naples. Nothing is known of the rest of the manuscript.

The present writers had the good fortune to visit the Pierpont Morgan Library in 1915. One of the first manuscripts put into their hands was this early sixth-century fragment of Pliny’s Letters, which forms the subject of the following pages. Having received permission to study the manuscript and publish results, they lost no time in acquainting classical scholars with this important find. In December of the same year, at the joint meeting of the American Archaeological and Philological Associations, held at Princeton University, two papers were read, one concerning the palaeographical, the other the textual, importance of the fragment. The two studies which follow, Part I by Doctor Lowe, Part II by Professor Rand, are an elaboration of the views presented at the meeting. Some months after the present volume was in the form of page-proof, Professor E. T. Merrill’s long-expected edition of Pliny’s Letters appeared (Teubner, Leipsic, 1922). We regret that we could not avail ourselves of it in time to introduce certain changes. The reader will still find Pliny cited by the pages of Keil, and in general he should regard the date of our production as 1921 rather than 1922.

The writers wish to express their gratitude for the privilege of visiting the Pierpont Morgan Library and making full use of its facilities. For permission to publish the manuscript they are indebted to the generous interest of Mr. J. Pierpont Morgan. They also desire to make cordial acknowledgment of the unfailing courtesy and helpfulness of the Librarian, Miss Belle da Costa Greene, and her assistant, Miss Ada Thurston....