A Residence in France During the Years 1792, 1793, 1794 and 1795, Part IV., 1795 Described in a Series of Letters from an English Lady: with General and Incidental Remarks on the French Character and Manners 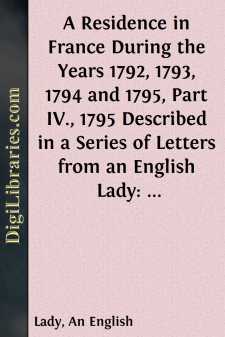 Nothing proves more that the French republican government was originally founded on principles of despotism and injustice, than the weakness and anarchy which seem to accompany every deviation from these principles. It is strong to destroy and weak to protect: because, deriving its support from the power of the bad and the submission of the timid, it is deserted or opposed by the former when it ceases to plunder or oppress— while the fears and habits of the latter still prevail, and render them as unwilling to defend a better system as they have been to resist the worst possible.

The reforms that have taken place since the death of Robespierre, though not sufficient for the demands of justice, are yet enough to relax the strength of the government; and the Jacobins, though excluded from authority, yet influence by the turbulence of their chiefs in the Convention, and the recollection of their past tyranny—against the return of which the fluctuating politics of the Assembly offer no security. The Committees of Public Welfare and General Safety (whose members were intended, according to the original institution, to be removed monthly) were, under Robespierre, perpetual; and the union they preserved in certain points, however unfavourable to liberty, gave a vigour to the government, of which from its conformation it should appear to have been incapable. It is now discovered, that an undefined power, not subject to the restriction of fixed laws, cannot remain long in the same hands without producing tyranny. A fourth part of the Members of these Committees are, therefore, now changed every month; but this regulation, more advantageous to the Convention than the people, keeps alive animosities, stimulates ambition, and retains the country in anxiety and suspense; for no one can guess this month what system may be adopted the next—and the admission of two or three new Jacobin members would be sufficient to excite an universal alarm.

We watch these renewals with a solicitude inconceivable to those who study politics as they do a new opera, and have nothing to apprehend from the personal characters of Ministers; and our hopes and fears vary according as the members elected are Moderates, Doubtfuls, or decided Mountaineers.*

* For instance, Carnot, whose talents in the military department obliged the Convention (even if they had not been so disposed) to forget his compliances with Robespierre, his friendship for Barrere and Collot, and his eulogiums on Carrier.

—This mixture of principles, which intrigue, intimidation, or expediency, occasions in the Committees, is felt daily; and if the languor and versatility of the government be not more apparent, it is that habits of submission still continue, and that the force of terror operates in the branches, though the main spring be relaxed. Were armies to be raised, or means devised to pay them now, it could not be done; though, being once put in motion, they continue to act, and the requisitions still in a certain degree supply them....