A Residence in France During the Years 1792, 1793, 1794 and 1795, Part III., 1794 Described in a Series of Letters from an English Lady: with General and Incidental Remarks on the French Character and Manners 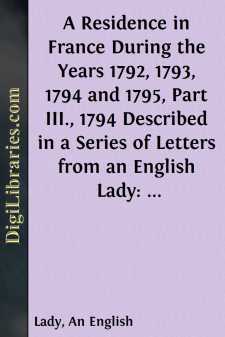 If I had undertaken to follow the French revolution through all its absurdities and iniquities, my indolence would long since have taken the alarm, and I should have relinquished a task become too difficult and too laborious. Events are now too numerous and too complicated to be described by occasional remarks; and a narrator of no more pretensions than myself may be allowed to shrink from an abundance of matter which will hereafter perplex the choice and excite the wonder of the historian.—Removed from the great scene of intrigues, we are little acquainted with them—we begin to suffer almost before we begin to conjecture, and our solicitude to examine causes is lost in the rapidity with which we feel their effects.

Amidst the more mischievous changes of a philosophic revolution, you will have learned from the newspapers, that the French have adopted a new aera and a new calendar, the one dating from the foundation of their republic, and other descriptive of the climate of Paris, and the productions of the French territory. I doubt, however, if these new almanack-makers will create so much confusion as might be supposed, or as they may desire, for I do not find as yet that their system has made its way beyond the public offices, and the country people are particularly refractory, for they persist in holding their fairs, markets, &c. as usual, without any regard to the hallowed decade of their legislators. As it is to be presumed that the French do not wish to relinquish all commercial intercourse with other nations, they mean possibly to tack the republican calendar to the rights of man, and send their armies to propagate them together; otherwise the correspondence of a Frenchman will be as difficult to interpret with mercantile exactness as the characters of the Chinese.

The vanity of these philosophers would, doubtless, be gratified by forcing the rest of Europe and the civilized world to adopt their useless and chimerical innovations, and they might think it a triumph to see the inhabitant of the Hebrides date "Vendemiaire," [Alluding to the vintage.] or the parched West-Indian "Nivose;" but vanity is not on this, as it is on many other occasions, the leading principle.—It was hoped that a new arrangement of the year, and a different nomenclature of the months, so as to banish all the commemorations of Christianity, might prepare the way for abolishing religion itself, and, if it were possible to impose the use of the new calendar so far as to exclude the old one, this might certainly assist their more serious atheistical operations; but as the success of such an introduction might depend on the will of the people, and is not within the competence of the bayonet, the old year will maintain its ground, and these pedantic triflers find that they have laboured to no more extensive a purpose, than to furnish a date to the newspapers, or to their own decrees, which no one will take the pains to understand.

Mankind are in general more attached to customs than principles....