A Residence in France During the Years 1792, 1793, 1794 and 1795, Part II., 1793 Described in a Series of Letters from an English Lady: with General and Incidental Remarks on the French Character and Manners 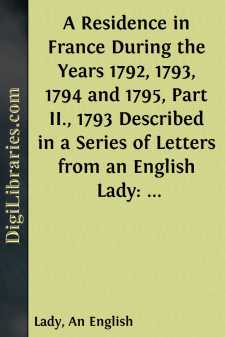 Vanity, I believe, my dear brother, is not so innoxious a quality as we are desirous of supposing. As it is the most general of all human failings, so is it regarded with the most indulgence: a latent consciousness averts the censure of the weak; and the wise, who flatter themselves with being exempt from it, plead in its favour, by ranking it as a foible too light for serious condemnation, or too inoffensive for punishment. Yet, if vanity be not an actual vice, it is certainly a potential one—it often leads us to seek reputation rather than virtue, to substitute appearances for realities, and to prefer the eulogiums of the world to the approbation of our own minds. When it takes possession of an uninformed or an ill-constituted mind, it becomes the source of a thousand errors, and a thousand absurdities. Hence, youth seeks a preeminence in vice, and age in folly; hence, many boast of errors they would not commit, or claim distinction by investing themselves with an imputation of excess in some popular absurdity—duels are courted by the daring, and vaunted by the coward—he who trembles at the idea of death and a future state when alone, proclaims himself an atheist or a free-thinker in public—the water-drinker, who suffers the penitence of a week for a supernumerary glass, recounts the wonders of his intemperance—and he who does not mount the gentlest animal without trepidation, plumes himself on breaking down horses, and his perils in the chace. In short, whatever order of mankind we contemplate, we shall perceive that the portion of vanity allotted us by nature, when it is not corrected by a sound judgement, and rendered subservient to useful purposes, is sure either to degrade or mislead us.

I was led into this train of reflection by the conduct of our Anglo-Gallican legislator, Mr. Thomas Paine. He has lately composed a speech, which was translated and read in his presence, (doubtless to his great satisfaction,) in which he insists with much vehemence on the necessity of trying the King; and he even, with little credit to his humanity, gives intimations of presumed guilt. Yet I do not suspect Mr. Paine to be of a cruel or unmerciful nature; and, most probably, vanity alone has instigated him to a proceeding which, one would wish to believe, his heart disapproves. Tired of the part he was playing, and which, it must be confessed, was not calculated to flatter the censurer of Kings and the reformer of constitutions, he determined to sit no longer for whole hours in colloquy with his interpreter, or in mute contemplation, like the Chancellor in the Critic; and the speech to which I have alluded was composed. Knowing that lenient opinions would meet no applause from the tribunes, he inlists himself on the side of severity, accuses all the Princes in the world as the accomplices of Louis the Sixteenth, expresses his desire for an universal revolution, and, after previously assuring the Convention the King is guilty, recommends that they may instantly proceed to his trial....