A Practical View of the Prevailing Religious System of Professed Christians, in the Middle and Higher Classes in this Country, Contrasted with Real Christianity. 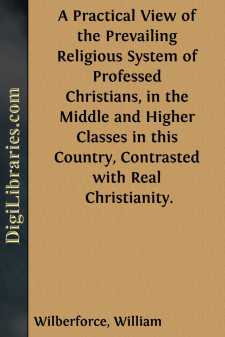 It has been, for several years, the earnest wish of the writer of the following pages to address his countrymen on the important subject of Religion; but the various duties of his public station, and a constitution incapable of much labour, have obstructed the execution of his purpose. Long has he been looking forward to some vacant season, in which he might devote his whole time and attention to this interesting service, free from the interruption of all other concerns; and he has the rather wished for this opportunity of undistracted and mature reflection, from a desire that what he might send into the world might thus be rendered less undeserving of the public eye. Meanwhile life is wearing away, and he daily becomes more and more convinced, that he might wait in vain for this season of complete vacancy. He must, therefore, improve such occasional intervals of leisure as may occur to him in the course of a busy life, and throw himself on the Reader’s indulgence for the pardon of such imperfections, as the opportunity of undiverted and more mature attention might have enabled him to discover and correct.

But the plea here suggested is by no means intended as an excuse for the opinions which he shall express, if they be found mistaken. Here, if he be in an error, it is however a deliberate error. He would indeed account himself unpardonable, if he were to intrude his first thoughts upon the Public on a question of such importance; and he can truly declare, that what he shall offer will be the result of much reading, observation, and inquiry, and of long, serious, and repeated consideration.

It is not improbable that he may be accused of deviating from his proper line, and of impertinently interfering in the concerns of a Profession to which he does not belong. If it were necessary, however, to defend himself against this charge, he might shelter himself under the authority of many most respectable examples. But surely to such an accusation it may be sufficient to reply, that it is the duty of every man to promote the happiness of his fellow-creatures to the utmost of his power; and that he who thinks he sees many around him, whom he esteems and loves, labouring under a fatal error, must have a cold heart, or a most confined notion of benevolence, if he could refrain from endeavouring to set them right, lest in so doing he should be accused of stepping out of his proper walk, and expose himself on that ground to the imputation of officiousness.

But he might also allege as a full justification, not only that Religion is the business of every one, but that its advancement or decline in any country is so intimately connected with the temporal interests of society, as to render it the peculiar concern of a political man; and that what he may presume to offer on the subject of Religion may perhaps be perused with less jealousy and more candour, from the very circumstance of its having been written by a Layman, which must at least exclude the idea (an idea sometimes illiberally suggested to take off the effect of the works of Ecclesiastics) that it is prompted by motives of self-interest, or of professional prejudice.

But if the writer’s apology be not found in the work itself, and in his avowed motive for undertaking it, he would in vain endeavour to satisfy his readers by any excuses he might assign; therefore, without farther preamble, he will proceed to the statement and execution of his purpose.

The main object which he has in view is, not to convince the Sceptic, or to answer the arguments of persons who avowedly oppose the fundamental doctrines of our Religion; but to point out the scanty and erroneous system of the bulk of those who belong to the class of orthodox Christians, and to contrast their defective scheme with a representation of what the author apprehends to be real Christianity....