A Narrative of the Mutiny, on Board the Ship Globe, of Nantucket, in the Pacific Ocean, Jan. 1824 And the journal of a residence of two years on the Mulgrave Islands; with observations on the manners and customs of the inhabitants 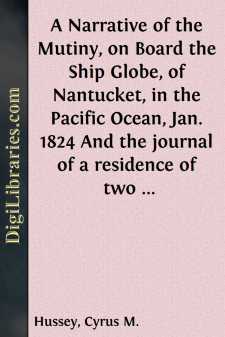 Formerly whales were principally taken in the North Seas: the largest were generally found about Spitzbergen, or Greenland, some of them measuring ninety feet in length. At the commencement of the hazardous enterprize of killing whales, before they had been disturbed by man, they were so numerous in the bays and harbours, that when taken the blubber was for the most part boiled into oil upon the contiguous coast.

The pure oil and whale bone were only preserved in those days; consequently a ship could carry home the product of a greater number of whales than a ship of the same size now can.—Indeed, so plentiful were the whales in those seas, and taken with such facility, that the ships employed, were not sufficient to carry home the oil and bone, and other ships were often sent to bring home the surplus quantity. But the coasts of these countries, were soon visited by ships from Denmark, Hamburgh, and Holland, as well as from England; and from frequently being killed in the shoal water near the coasts, the whales gradually receded from the shores, and have since been found only in deeper water, and at a much greater distance from the land.

In the earlier stages of the whale fishery, of which we are now treating, the ships were generally on the whaling waters, early in May, and whether successful or not, they were obliged to commence their return by the succeeding August, to avoid the early accumulation of ice in those seas. But it not unfrequently happened, that ships procured and returned with a cargo in the months of June and July, making a voyage only about three months, whereas, a voyage to the Pacific Ocean is now often protracted to three years!

Among the early whalers it was customary to have six boats to a ship, and six men to a boat, besides the harpooner. What at that time was considered an improved method in killing whales, consisted in discharging the harpoon, from a kind of swivel; but it was soon found to be attended with too much inconvenience to be much practised, and the muscular arms and steady nerves of the harpooner, have ever since performed the daring duty, of first striking the whale. The ropes attached to the harpoon, used to be about 200 fathoms in length, and some instances occurred, that all the lines belonging to six boats, were fastened together and ran out by one whale, the animal descending in nearly a perpendicular line from the surface. Instead of going prepared to bring home a ship load of oil, it was customary to bring only the blubber, and instead of trying the oil out and putting it into casks on board, the fat of the whale was cut up into suitable pieces, pressed hard in tubs carried out for the purpose, and in this situation was the return cargo received at home.

Of so great consequence was the whale fishery considered to Great Britain, that a bounty of 40s. for every ton, when the ship was 200 tons, or upwards, was given to the crews of ships engaged in that business in the Greenland seas, under certain conditions. But this bounty was found to draw too largely upon the treasury; and while the subject was under discussion in the British Parliament, in 1786, it was stated that the sums which that country had paid in bounties to the Greenland fishers, amounted to 1,265,461 pounds sterling. Six thousand seamen were employed in that fishery, and each cost the government £13 10s. per annum. The great encouragement given to that branch of commerce, caused so large a number to engage in it, that the oil market became glutted, and it was found necessary to export considerable quantities.

In 1786, the number of British ships engaged in the whale fishery to Davis’s Strait and the Greenland seas, was 139, besides 15 from Scotland. In 1787, notwithstanding the bounty had been diminished, the number of English ships was 217, and the following year 222....