A Letter to a Gentleman in the Country, from His Friend in London Giving an Authentick and Circumstantial Account of the Confinement, Behaviour, and Death of Admiral Byng, as Attested by the Gentlemen Who Were Present 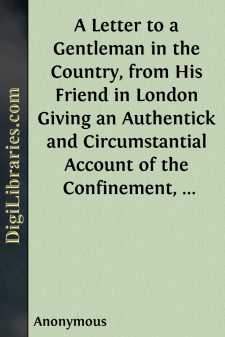 Agreeable to your request, I have taken great pains to collect all the particulars, relating to the behaviour and death of the unfortunate Admiral Byng.

You know me sufficiently, to be satisfied that I have never had any biass in his favour, or against him. But as the whole affair has been laid before the publick, sufficiently plain for every man of common sense, not prejudiced, to understand it; excepting some inexplicable Circumstances relating to the Court Martial; I may be allowed to judge for myself, and yield to truths which I think can admit of no farther controversy.

It is true, there are yet sophisters, who want to impose upon us; but I think their designs are easily seen through. It is impossible that any impartial man should fail to observe the almost incredible pains taken to misrepresent and blacken his publick and private character. Even now, after he has paid the forfeit of his life, for crimes, at most, only disputably so, there are a great number of emissaries, who seem to make it their business to go from one coffee-house to another, spreading the most scandalous reports with regard to his death. Dying Speeches, containing the most infamous absurdities, have been imposed upon the publick, with several booksellers names prefixed in the title-page, in order to give them the air of authenticity.

For what end and purposes all these measures have been taken, they can best tell, who have always been, and still continue so indefatigably industrious. But I must confess they greatly raise my indignation; and I am at last fully persuaded, hidden political machinery has been employed against this unfortunate gentleman. Our friend D—— says, cunning heads, black hearts, and long purses. Indeed, I think it appears very evident, that some persons are very active and solicitous to load him with ignominious crimes, with a view to exculpate themselves, or others; to render him odious in the eyes of the people, that his fall may be unlamented. But can a generous nation, like this, where understanding abounds, accept of his blood for the crimes of any other? surely, it cannot be.

I believe you will agree with me in thinking, that the Admiral’s behaviour before and at the time of his death; his observations and conversation with his friends; together with the paper containing his thoughts on the occasion, wrote by himself, and signed, which he gave to the Marshal of the Admiralty, immediately before the sentence passed upon him was put in execution; must hereafter be his best Apology, Exculpation, and Encomium; must reflect honour upon his family, and be an indelible reproach to some of our cotemporaries; who have practised every wicked artifice, to deceive and spirit up the people, and to throw a mist over the whole of this transaction.

Without any farther preamble, I shall proceed to give you a relation of the particulars, as they are ascertained to me, by the concurring testimony of gentlemen who were upon the spot; whose veracity cannot be doubted, and whose authority to vouch them again, may be easily obtained....