A Letter Addressed to the Abbe Raynal, on the Affairs of North America, in Which the Mistakes in the Abbe's Account of the Revolution of America Are Corrected and Cleared Up 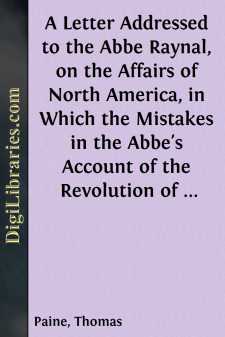 A London translation of an original work in French, by the Abbe Raynal, which treats of the Revolution of North America, having been reprinted in Philadelphia and other parts of the continent, and as the distance at which the Abbe is placed from the American theatre of war and politics, has occasioned him to mistake several facts, or misconceive the causes or principles by which they were produced; the following tract, therefore, is published with a view to rectify them, and prevent even accidental errors intermixing with history, under the sanction of time and silence.

The Editor of the London edition has entitled it, "The Revolution of America, by the Abbe Raynal," and the American printers have followed the example. But I have understood, and I believe my information just, that the piece, which is more properly reflections on the revolution, was unfairly purloined from the printer which the Abbe employed, or from the manuscript copy, and is only part of a larger work then in the press, or preparing for it. The person who procured it appears to have been an Englishman; and though, in an advertisement prefixt to the London edition, he has endeavoured to gloss over the embezzlement with professions of patriotism, and to soften it with high encomiums on the author, yet the action, in any view in which it can be placed, is illiberal and unpardonable.

"In the course of his travels," says he, "the translator happily succeeded in obtaining a copy of this exquisite little piece, which has not yet made its appearance from any press. He publishes a French edition, in favour of those who will feel its eloquent reasoning more forcibly in its native language, at the same time with the following translation of it; in which he has been desirous, perhaps in vain, that all the warmth, the grace, the strength, the dignity of the original should not be lost. And he flatters himself, that the indulgence of the illustrious historian will not be wanting to a man, who, of his own motion, has taken the liberty to give this composition to the public, only from a strong persuasion, that this momentous argument will be useful, in a critical conjecture, to that country which he loves with an ardour that can be exceeded only by the nobler flame which burns in the bosom of the philanthropic author, for the freedom and happiness of all the countries upon earth."

This plausibility of setting off a dishonourable action, may pass for patriotism and sound principles with those who do not enter into its demerits, and whose interest is not injured, nor their happiness affected thereby. But it is more than probable, notwithstanding the declarations it contains, that the copy was obtained for the sake of profiting by the sale of a new and popular work, and that the professions are but a garb to the fraud.

It may with propriety be remarked, that in all countries where literature is protected, and it never can flourish where it is not, the works of an author are his legal property; and to treat letters in any other light than this, is to banish them from the country, or strangle them in the birth.—The embezzlement from the Abbe Raynal was, it is true, committed by one country upon another, and therefore shews no defect in the laws of either. But it is nevertheless a breach of civil manners and literary justice; neither can it be any apology, that because the countries are at war, literature shall be entitled to depredation.

But the forestalling the Abbe's publication by London editions, both in French and English, and thereby not only defrauding him, and throwing an expensive publication on his hands, by anticipating the sale, are only the smaller injuries which such conduct may occasion. A man's opinions, whether written or in thought, are his own until he pleases to publish them himself; and it is adding cruelty to injustice to make him the author of what future reflection or better information might occasion him to suppress or amend. There are declarations and sentiments in the Abbe's piece, which, for my own part, I did not expect to find, and such as himself, on a revisal, might have seen occasion to change, but the anticipated piracy effectually prevented him the opportunity, and precipitated him into difficulties, which, had it not been for such ungenerous fraud, might not have happened.

This mode of making an author appear before his time, will appear still more ungenerous, when we consider how exceedingly few men there are in any country who can at once, and without the aid of reflection and revisal, combine warm passions with a cool temper, and the full expansion of imagination with the natural and necessary gravity of judgment, so as to be rightly balanced within themselves, and to make a reader feel, and understand justly at the same time. To call three powers of the mind into action at once, in a manner that neither shall interrupt, and that each shall aid and vigorate the other, is a talent very rarely possessed.

It often happens, that the weight of an argument is lost by the wit of setting it off, or the judgment disordered by an intemperate irritation of the passions: yet a certain degree of animation must be felt by the writer, and raised in the reader, in order to interest the attention; and a sufficient scope given to the imagination, to enable it to create in the mind a sight of the persons, characters, and circumstances of the subject; for without these, the judgment will feel little or no excitement to office, and its determinations will be cold, sluggish, and imperfect. But if either or both of the two former are raised too high, or heated too much, the judgment will be jostled from his seat, and the whole matter, however important in itself, will diminish into a pantomime of the mind, in which we create images that promote no other purpose than amusement.

The Abbe's writings bear evident marks of that extension and rapidness of thinking and quickness of sensation which of all others require revisal, and the more particularly so when applied to the living characters of nations or individuals in a state of war. The least misinformation or misconception leads to some wrong conclusion and an error believed becomes the progenitor of others. And as the Abbe has suffered some inconveniences in France, by mistating certain circumstances of the war and the characters of the parties therein, it becomes some apology for him, that those errors were precipitated into the world by the avarice of an ungenerous enemy....