A General History and Collection of Voyages and Travels - Volume 18 Historical Sketch of the Progress of Discovery, Navigation, and Commerce, from the Earliest Records to the Beginning of the Nineteenth Century, By William Stevenson 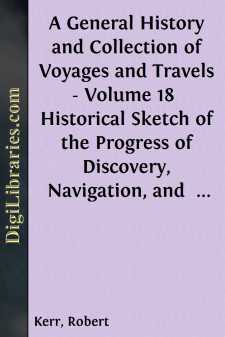 HISTORICAL SKETCH OF THE PROGRESS OF DISCOVERY, AND OF COMMERCIAL ENTERPRISE, FROM THE EARLIEST RECORDS, TO THE TIME OF HERODOTUS. B.C. 450.

The earliest traces of navigation and commerce are necessarily involved in much obscurity, and are, besides, few and faint. It is impossible to assign to them any clear and definite chronology; and they are, with a few exceptions, utterly uncircumstantial. Nevertheless, in a work like this, they ought not to be passed over without some notice; but the notice we shall bestow upon them will not be that either of the chronologist or antiquarian, but of a more popular, appropriate, and useful description.

The intercourse of one nation with another first took place in that part of the world to which a knowledge of the original habitation of mankind, and of the advantages for sea and land commerce which that habitation enjoyed, would naturally lead us to assign it. On the shores of the Mediterranean, or at no great distance from that sea, among the Israelites, the Phoenicians, and the Egyptians, we must look for the earliest traces of navigation and commerce; and, in the only authentic history of the remotest period of the world, as well as amidst the scanty and fabulous materials supplied by profane writers, these nations are uniformly represented as the most ancient navigators and traders.

The slightest inspection of the map of this portion of the globe will teach us that Palestine, Phoenicia, and Egypt were admirably situated for commerce both by sea and land. It is, indeed, true that the Phoenicians, by the conquests of Joshua, were expelled from the greatest part of their territory, and obliged to confine themselves to a narrow slip of ground between Mount Lebanon and the Mediterranean; but even this confined territory presented opportunities and advantages for commerce of no mean importance: they had a safe coast,--at least one good harbour; and the vicinity of Lebanon, and other mountains, enabled them to obtain, with little difficulty and expence, a large supply of excellent materials for shipbuilding. There are, moreover, circumstances which warrant the supposition, that, like Holland in modern times, they were rather the carriers of other nations, than extensively engaged in the commerce of their own productions or manufactures. On the north and east lay Syria, an extensive country, covered with a deep rich soil, producing an abundant variety of valuable articles. With this country, and much beyond it, to the east, the means and opportunities of communication and commerce were easy, by the employment of the camel; while, on the other hand, the caravans that carried on the commerce of Asia and Africa necessarily passed through Phoenicia, or the adjacent parts of Palestine.

Egypt, in some respects, was still more advantageously situated for commerce than Phoenicia: the trade of the west of Asia, and of the shores of the Mediterranean lay open to it by means of that sea, and by the Nile and the Red Sea a commercial intercourse with Arabia, Persia, and India seemed almost to be forced upon their notice and adoption....