A General History and Collection of Voyages and Travels - Volume 15 Forming A Complete History Of The Origin And Progress Of Navigation, Discovery, And Commerce, By Sea And Land, From The Earliest Ages To The Present Time 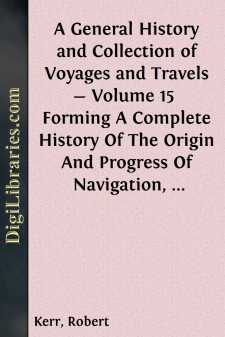 FROM LEAVING NEW ZEALAND TO OUR RETURN TO ENGLAND.

Range from Christmas Sound, round Cape Horn, through Strait Le Maire, and round Staten Land; with an Account of the Discovery of a Harbour in that Island, and a Description of the Coasts.

At four o'clock in the morning on the 28th, we began to unmoor, and at eight weighed, and stood out to sea, with a light breeze at N.W., which afterwards freshened, and was attended with rain. At noon, the east point of the sound (Point Nativity) bore N. 1/2 W., distant one and a half leagues, and St Ildefonzo Isles S.E. 1/2 S., distant seven leagues. The coast seemed to trend in the direction of E. by S.; but the weather being very hazy, nothing appeared distinct.

We continued to steer S.E. by E. and E.S.E.; with a fresh breeze at W.N.W., till four o'clock p.m., when we hauled to the south, in order to have a nearer view of St Ildefonzo Isles. At this time we were abreast of an inlet, which lies E.S.E, about seven leagues from the sound; but it must be observed that there are some isles without this distinction. At the west point of the inlet are two high peaked hills, and below them, to the east, two round hills, or isles, which lie in the direction of N.E. and S.W. of each other. An island, or what appeared to be an island, lay in the entrance; and another but smaller inlet appeared to the west of this: Indeed the coast appeared indented and broken as usual.

At half past five o'clock, the weather clearing up, gave us a good sight of Ildefonzo Isles. They are a group of islands and rocks above water, situated about six leagues from the main, and in the latitude of 55° 53' S., longitude 69° 41' W.

We now resumed our course to the east, and, at sun-set, the most advanced land bore S.E. by E. 3/4 E.; and a point, which I judged to be the west point of Nassau Bay, discovered by the Dutch fleet under the command of Admiral Hermite in 1624, bore N. 80° E., six leagues distant. In some charts this point is called False Cape Horn, as being the southern point of Terra del Fuego. It is situated in latitude 55° 39' S. From the inlet above-mentioned to this false cape, the direction of the coast is nearly east, half a point south, distant fourteen or fifteen leagues.

At ten o'clock, having shortened sail, we spent the night in making short boards under the top-sails, and at three next morning made sail, and steered S.E. by S., with a fresh breeze at W.S.W., the weather somewhat hazy. At this time the west entrance to Nassau Bay extended from N. by E. to N.E. 1/2 E., and the south side of Hermite's Isles, E. by S. At four, Cape Horn, for which we now steered, bore E. by S. It is known, at a distance, by a high round hill over it. A point to the W.N.W. shews a surface not unlike this; but their situations alone will always distinguish the one from the other.

At half past seven, we passed this famous cape, and entered the southern Atlantic ocean. It is the very same point of land I took for the cape, when I passed it in 1769, which at that time I was doubtful of....