A General History and Collection of Voyages and Travels, Volume 11 Arranged in Systematic Order: Forming a Complete History of the Origin and Progress of Navigation, Discovery, and Commerce, by Sea and Land, from the Earliest Ages to the Present Time 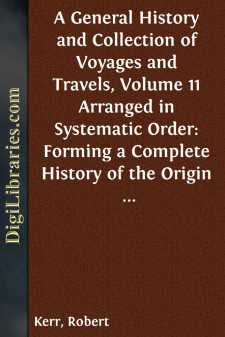 VOYAGE ROUND THE WORLD, BY CAPTAIN GEORGE SHELVOCKE, IN 1719-1722. SECTION V. Voyage from California to Canton in China.

We fell in with the coast of California on the 11th of August, and as soon as we were discovered by the natives, they made fires on the shore as we sailed past. Towards evening, two of them came off on a bark log, and were with difficulty induced to come on board. Seeing our negroes standing promiscuously among the whites, they angrily separated them from us, and would hardly suffer them to look at us. They then made signs for us to sit down, after which one of them put himself into strange postures, talking to us with great vehemence, and seeming to be in a transport of extacy, running from one to the other of us with great vehemence, continually singing, speaking, and running, till quite out of breath. Night coming on, they were for departing, when we gave them a knife and an old coat each, with which they were much pleased, and invited us by signs to go on shore along with them. On the 13th, we were near Porto Leguro, whence some of the natives came out to meet us on bark-logs, while others made fires, as if to welcome us, on the tops of hills and rocks near the sea, all seemingly rejoiced to see us; those on shore running up and down to each other, and those on the bark-logs paddling with all their strength to meet us.

No sooner was our anchor down than they came off to us in crowds, some off bark-logs, but most of them swimming, all the while talking and calling to each other confusedly. In an instant our ship was full of these swarthy gentry, all quite naked. Among the rest was their king or chief; who was no way distinguishable from the rest by any particular ornament, or even by any deference paid to him by his people, his only ensign of sovereignty being a round black stick of hard wood, about two feet and a half long. This being observed by some of our people, they brought him to me, and concluding that I was the chief of the ship, he delivered his black sceptre to me in a handsome manner, which I immediately returned. Notwithstanding his savage appearance, this man had a good countenance, and there was something dignified in his manner and behaviour. I soon found a way to regale them, by setting before them abundance of our choicest Peruvian conserves, with which they seemed much gratified. They were accommodated with spoons, mostly silver, all of which they very honestly returned.

Having thus commenced friendship with the natives, I sent an officer ashore to view the watering-place; and, to make him the more welcome, I sent with him some coarse blue baize and some sugar, to distribute among the women. On seeing our boat ready to put off, the king was for accompanying her in his bark-log, but I persuaded him to go in the boat, with which he seemed to be much gratified. The remainder of the day was spent with our wild visitors, who behaved in general very quietly. The officer returned with an account of having been very civilly received, and we prepared our casks for being sent ashore next morning....