A General History and Collection of Voyages and Travels - Volume 10 Arranged in systematic order: Forming a complete history of the origin and progress of navigation, discovery, and commerce, by sea and land, from the earliest ages to the present time. 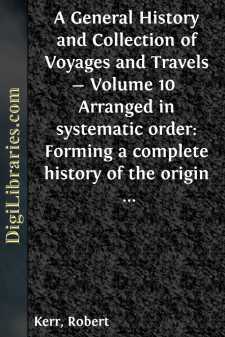 EARLY CIRCUMNAVIGATIONS, OR VOYAGES ROUND THE WORLD.

In this fourth book of the second part of our arrangement, it is proposed to give a history of the principal Circumnavigations, or Voyages Round the World, previous to the reign of our present venerable sovereign. This book, therefore, comprises a period of 226 years, from the year 1519, when Magellan sailed from Spain on the first circumnavigation of the globe, till the year 1744, when Commodore Anson returned to England from a similar expedition. The more recent circumnavigations, which have taken place since the year 1760, chiefly under the munificent and enlightened patronage of GEORGE III. or in imitation of these, and which have largely contributed to extend, and almost to render perfect, the geography and hydrography of the terraqueous globe, are intended to form a separate division, in a subsequent part of our arrangement.

The accurate knowledge which we now possess of the form and dimensions of this globe of earth and water which we inhabit, has been entirely owing to the superior skill of the moderns in the mathematical sciences, as applicable to the practice of navigation, and to the observation and calculation of the motions of the heavenly bodies, for the ascertainment of latitudes and longitudes. It would require more space than can be conveniently devoted on the present occasion, to give any clear view of the geographical knowledge possessed by the ancients, together with a history of the progress of that science, from the earliest times, neither do the nature and objects of the present Collection of Voyages and Travels call for any such deduction, of which an excellent epitome will be found in the History of Geography, prefixed to Playfair's System of Geography.

The ancients laboured under almost absolute incapacities for making extensive voyages or discoveries by sea, proceeding from ignorance of the form and dimensions of the earth, and other causes. They were but indifferently versed in the practical part of astronomy, without which, and those instruments which have been invented almost exclusively by the moderns, for measuring the paths, distances, and relative positions of the heavenly bodies, it is impossible to launch out with any tolerable success or safety on the trackless ocean. They were ignorant also of that wonderful property of the magnet or loadstone, which, pointing invariably towards the north, enables the modern mariner to know his precise course, at all times of the day of night, though clouds and thick mists may hide the luminaries of heaven from his observation, which were the only means of direction known to the ancients.

Various systems and theories appear to have prevailed among the ancients respecting the figure and motion of the earth; some justly enough supposing it to be a ball or sphere, suspended in infinite space, while others conceived it to be a flat surface, floating upon and surrounded by an interminable ocean. The just conceptions of some ancient philosophers, respecting the spherical figure of the earth, and its diurnal motion around its own axis, were superseded by others of a more popular nature, and forgotten for many ages....