A General History and Collection of Voyages and Travels - Volume 09 Arranged in Systematic Order: Forming a Complete History of the Origin and Progress of Navigation, Discovery, and Commerce, by Sea and Land, from the Earliest Ages to the Present Time 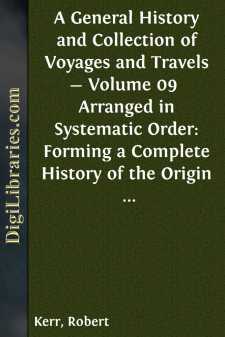 EARLY VOYAGES OF THE ENGLISH TO INDIA, AFTER THE ESTABLISHMENT OF THE EAST INDIA COMPANY.

Eighth Voyage of the English East India Company, in 1611, by Captain John Saris.

SECTION 5. Farther Observations respecting the Moluccas, and the Completion of the Voyage to Japan.

The 10th of April, 1613, the Spanish commandant sent me a message, requesting me to stop till the next morning, when he would visit me along with the sergeant-major of Ternate, who had arrived with a letter from Don Jeronimo de Sylva, allowing them to trade with me for different things of which they were in want, and to satisfy me in what I had requested; wherefore I resolved to stop a while longer, to see if we could do any good. Expecting Don Fernando next day, according to promise, and hearing nine guns from their fort, we supposed he was coming: But it proved to be for the arrival of the prince of Tidore from the wars, who was returned with the heads of 100 Ternatans. His force in the expedition in which he had been engaged, consisted of sixty men armed with matchlocks, two brass bases and three or four fowlers. He had over-thrown Key Chilly Sadang, the son of the king of Ternate, whom the Dutch had brought over from Ternate to prevent the natives of Machian from supplying us with cloves. While on his return to Ternate after our departure, he was drawn into an ambush by the son of the king of Tidore, who lay in wait for the purpose, and slew him, together with 160 men who were along with him, not one of the whole being spared. The prince of Ternate brought home the head of Key Chilly Sadang to his wife, who was sister to the slain prince. Key Chilly Sadang in a great measure owed this discomfiture to a barrel of powder he had bought from us at Machian, as it exploded at the commencement of the rencounter, and threw his whole party into confusion. Along with the prince of Ternate, one of his younger brothers and the king of Gilolo were both slain. Towards evening, the sergeant-major of Ternate, who was also secretary of the government, came aboard, and made many compliments, requesting me to come to Ternate, where they would do for me every thing in their power. I consented to do this the more readily, as Ternate was in my way.

I received a message on the 12th from the prince of Tidore, apologising for not having yet visited me, and saying that he had a quantity of cloves which I might have, for which I thanked him, and requested they might be sent soon. They promised to send the cloves before next morning; wherefore, to guard against treachery, I kept double watch, with match in cock, and every thing in readiness: For this prince of Tidore was a most resolute and valiant soldier, and had performed many desperate exploits against the Dutch, having shortly before surprised one of their ships of war when at anchor not far from where we then lay. Before day, a galley, which the Spaniards told us they expected, came over from Batta China, and were very near us in the dark before we were aware....