A General History and Collection of Voyages and Travels - Volume 04 Arranged in Systematic Order: Forming a Complete History of the Origin and Progress of Navigation, Discovery, and Commerce, by Sea and Land, from the Earliest Ages to the Present Time 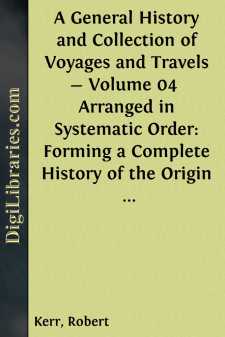 HISTORY OF THE DISCOVERY AND CONQUEST OF MEXICO, WRITTEN IN THE YEAR 1568, BY CAPTAIN BERNAL DIAZ DEL CASTILLO, ONE OF THE CONQUERORS.--Continued.

The Spaniards commence their March to Mexico; with an account of the War in Tlascala, and the submission of that Nation.

Everything being in readiness for our march to Mexico, we were advised by our allies of Chempoalla to proceed by way of Tlascala, the inhabitants of that province being in friendship with them and constantly at war with the Mexicans; and at our requisition, we were joined by fifty of the principal warriors of the Totanacas[1], who likewise gave us 200 tlamama, or men of burden, to draw our guns and to transport our baggage and ammunition[2]. Our first day's march on the 16th of August 1519, was to Xalapan, and our second to Socochima, a place of difficult approach, surrounded by vines. During the whole of this march, the main body was kept in compact order, being always preceded by an advance of light infantry, and patroles of cavalry. Our interpreters informed the people of this place, that we were subjects of the great emperor Don Carlos, who had sent us to abolish human sacrifices and various other abuses; and as these people were allies of Chempoalla and independent of Montezuma, they treated us in a friendly manner. We erected a cross at this place, explaining its signification and giving them information of many things belonging to our holy faith, and exhorting them to reverence the cross. From this place we proceeded by a difficult pass among lofty mountains to Texotla, the people of which place were well disposed to us, as they also paid no tribute to Montezuma. Continuing our march through desert lofty mountains, we experienced excessive cold, with heavy falls of hail, and came next day to a pass, where there were some houses and large temples, and great piles of wood intended for the service of the idols. Provisions were scarce during the two last days, and we now approached the confines of the Mexican empire, at a place called Xocotlan; to the cacique of which place Cortes sent a message informing him of our arrival. The appearance of this place evinced that we were entering upon a new and richer country. The temples and other buildings were lofty, with terraced roofs, and had a magnificent appearance, being all plastered and white-washed, so as to resemble some of our towns in Spain; on which account we called this place Castel blanco.

[1] Clavigero says that Cortes had some troops of the Totanacas, among whom were forty nobles, serving at the same time as auxiliaries, and as hostages for the fidelity of their nation.--Clavig. II. 30. [2] In Clavigero, II. 29. the army of Cortes on this occasion is stated to have amounted to 415 Spanish infantry and 16 cavalry.--E.

In consequence of our message, the cacique and other principal persons of the town came out to meet us, and conducted us to our quarters, where they gave us a very poor entertainment. After supper, Cortes inquired respecting the military power of Montezuma, and was told that he was able to bring prodigious armies into the field....