A General History and Collection of Voyages and Travels - Volume 01 Arranged in Systematic Order: Forming a Complete History of the Origin and Progress of Navigation, Discovery, and Commerce, by Sea and Land, from the Earliest Ages to the Present Time 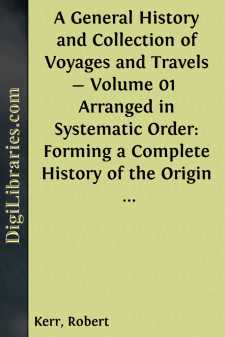 Discoveries in the time of Alfred King of England, in the ninth century of the Christian era.

In the midst of the profound ignorance and barbarism which overspread the nations of Western Europe, after the dissolution of the Roman empire in the West, a transient ray of knowledge and good government was elicited by the singular genius of the great Alfred, a hero, legislator, and philosopher, among a people nearly barbarous. Not satisfied with having delivered his oppressed and nearly ruined kingdom from the ravages of the almost savage Danes and Nordmen, and the little less injurious state of anarchy and disorganization into which the weakness of the vaunted Anglo-Saxon system of government had plunged England, he for a time restored the wholesome dominion of the laws, and even endeavoured to illuminate his ignorant people by the introduction of useful learning. In the prosecution of these patriotic views, and for his own amusement and instruction, besides other literary performances, he made a translation of the historical work of Orosius into his native Anglo-Saxon dialect; into which he interwove the relations of Ohthere and Wulfstan, of which hereafter, and such other information as he could collect respecting the three grand divisions of the world then known; insomuch, that his account of Europe especially differs very materially from that of Orosius, of which he only professed to make a translation.

Although Alfred only mounted the throne of England in 872, it has been deemed proper to commence the series of this work with the discovery of Iceland by the Nordmen or Norwegians, about the year 861, as intimately connected with the era which has been deliberately chosen as the best landmark of our proposed systematic History and Collection of Voyages and Travels. That entirely accidental incident is the earliest geographical discovery made by the modern nations, of which any authentic record now remains, and was almost the only instance of the kind which occurred, from the commencement of the decline of the Roman power, soon after the Christian era, for nearly fourteen centuries. And as the colonization of Iceland did not begin till A.D. 878, the insertion of this circumstance in the present place, can hardly be considered as at all deviating from the most rigid principles of our plan.

Discovery of Iceland by the Norwegians in the Ninth Century[1].

It were foreign to our present object to attempt any delineation of the piratical, and even frequently conquering expeditions of the various nations of Scandinavia, who, under the names of Angles, Saxons, Jutes, Danes, and Normans, so long harassed the fragments of the Roman empire. About the year 861, one Naddod, a Nordman or Norwegian vikingr, or chief of a band of freebooters, who, during a voyage to the Faro islands, was thrown by a storm upon the eastern coast of an unknown country, considerably beyond the ordinary course of navigation, to which he gave the significant name of Snio-land, or Snow-land, from the immense quantities of snow which every where covered its numerous lofty mountains, even in the height of summer, and filled its many valleys during a long and dreary winter....