A Dialogue Concerning Oratory, Or The Causes Of Corrupt Eloquence The Works Of Cornelius Tacitus, Volume 8 (of 8); With An Essay On His Life And Genius, Notes, Supplements 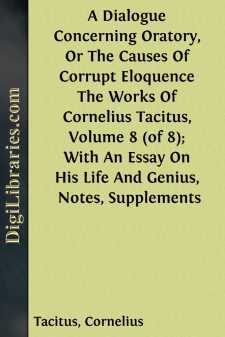 A DIALOGUE CONCERNING ORATORY, OR THE CAUSES OF CORRUPT ELOQUENCE.

. General introduction, with the reasons for writing an account of the following discourse.

. The persons engaged in the dialogue; at first, Curiatius Maternus, Julius Secundus, and Marcus Aper.

. Secundus endeavours to dissuade Maternus from thinking any more of dramatic composition.

. Maternus gives his reasons for persisting.

. Aper condemns his resolution, and, in point of utility, real happiness, fame and dignity, contends that the oratorical profession is preferable to the poetical.

. He cites the example of Eprius Marcellus and Crispus Vibius, who raised themselves by their eloquence to the highest honours.

. Poetical fame brings with it no advantage.

. He exhorts Maternus to relinquish the muses, and devote his whole to eloquence and the business of the bar.

. Maternus defends his favourite studies; the pleasures arising from poetry are in their nature innocent and sublime; the fame is extensive and immortal. The poet enjoys the most delightful intercourse with his friends, whereas the life of the public orator is a state of warfare and anxiety.

. Vipstanius Messala enters the room. He finds his friends engaged in a controversy, and being an admirer of ancient eloquence, he advises Aper to adopt the model of the ancients in preference to the plan of the modern rhetoricians.

. Hence a difference of opinion concerning the merit of the ancients and the moderns. Messala, Secundus, and Maternus, profess themselves admirers of the oratory that flourished in the time of the republic. Aper launches out against the ancients, and gives the preference to the advocates of his own time. He desires to know who are to be accounted ancients.

. Eloquence has various modes, all changing with the conjuncture of the times. But it is the nature of men to praise the past, and censure the present. The period when Cassius Severus flourished, is stated to be the point of time at which men cease to be ancients; Cassius with good reason deviated from the ancient manner.

. The character of Calvus, Cælius, Cæsar and Brutus, and also of Asinius Pollio, and Messala Corvinus.

. The praise and censure of Cicero.

. The true rhetorical art consists in blending the virtues of ancient oratory with the beauties of the modern style.

. Maternus observes that there can be no dispute about the superior reputation of the ancient orators: he therefore calls upon Messala to take that point for granted, and proceed to an enquiry into the causes that produced so great an alteration.

. After some observations on the eloquence of Calvus, Asinius Pollio, Cæsar, Cicero, and others, Messala praises Gracchus and Lucius Crassus, but censures Mæcenas, Gallio, and Cassius Severus.

. Maternus reminds Messala of the true point in question; Messala proceeds to assign the causes which occasioned the decay of eloquence, such as the dissipation of the young men, the inattention of their parents, the ignorance of rhetorical professors, and the total neglect of ancient discipline....