A Description of Millenium Hall And the Country Adjacent Together with the Characters of the Inhabitants and Such Historical Anecdotes and Reflections As May Excite in the Reader Proper Sentiments of Humanity, and Lead the Mind to the Love of Virtue 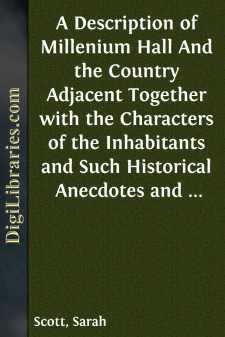 A DESCRIPTION OF MILLENIUM HALL

Though, when I left London, I promised to write to you as soon as I had reached my northern retreat, yet, I believe, you little expected instead of a letter to receive a volume; but I should not stand excused to myself, were I to fail communicating to you the pleasure I received in my road hither, from the sight of a society whose acquaintance I owe to one of those fortunate, though in appearance trifling, accidents, from which sometimes arise the most pleasing circumstances of our lives; for as such I must ever esteem the acquaintance of that amiable family, who have fixed their abode at a place which I shall nominate Millenium Hall, as the best adapted to the lives of the inhabitants, and to avoid giving the real name, fearing to offend that modesty which has induced them to conceal their virtues in retirement.

In giving you a very circumstantial account of this society, I confess I have a view beyond the pleasure which a mind like yours must receive from the contemplation of so much virtue. Your constant endeavours have been to inculcate the best principles into youthful minds, the only probable means of mending mankind; for the foundation of most of our virtues, or our vices, are laid in that season of life when we are most susceptible of impression, and when on our minds, as on a sheet of white paper, any characters may be engraven; these laudable endeavours, by which we may reasonably expect the rising generation will be greatly improved, render particularly due to you, any examples which may teach those virtues that are not easily learnt by precept and shew the facility of what, in mere speculation, might appear surrounded with a discouraging impracticability: you are the best judge, whether, by being made public, they may be conducive to your great end of benefiting the world. I therefore submit the future fate of the following sheets entirely to you, and shall not think any prefatory apology for the publication at all requisite; for though a man who supposes his own life and actions deserve universal notice, or can be of general use, may be liable to the imputation of vanity, yet, as I have no other share than that of a spectator, and auditor, in what I purpose to relate, I presume no apology can be required; for my vanity must rather be mortified than flattered in the description of such virtues as will continually accuse me of my own deficiencies, and lead me to make a humiliating comparison between these excellent ladies and myself.

You may remember, Sir, that when I took leave of you with a design of retiring to my native county, there to enjoy the plenty and leisure for which a few years labour had furnished me with the necessary requisites, I was advised by an eminent physician to make a very extensive tour through the western part of this kingdom, in order, by frequent change of air, and continued exercise, to cure the ill effects of my long abode in the hot and unwholesome climate of Jamaica, where, while I increased my fortune, I gradually impaired my constitution; and though one who, like me, has dedicated all his application to mercantile gain, will not allow that he has given up the substance for the shadow, yet perhaps it would be difficult to deny that I thus sacrificed the greater good in pursuit of the less.

The eagerness with which I longed to fix in my wished-for retirement, made me imagine that when I had once reached it, even the pursuit of health would be an insufficient inducement to determine me to leave my retreat. I therefore chose to make the advised tour before I went into the north. As the pleasure arising from a variety of beautiful objects is but half enjoyed when we have no one to share it with us, I accepted the offer Mr Lamont (the son of my old friend) made of accompanying me in my journey. As this young gentleman has not the good fortune to be known to you, it may not be amiss, as will appear in the sequel, to let you into his character.

Mr Lamont is a young man of about twenty-five years of age, of an agreeable person, and lively understanding; both perhaps have concurred to render him a coxcomb. The vivacity of his parts soon gained him such a degree of encouragement as excited his vanity, and raised in him a high opinion of himself....