A Declaration of the Causes, which mooved the chiefe Commanders of the Nauie of her most excellent Maiestie the Queene of England, in their voyage and expedition for Portingal, to take and arrest in the mouth of the Riuer of Lisbone, certaine Shippes of corne and other prouisions of warre bound for the said Citie Prepared for the seruices of the King of Spaine, in the Ports and Prouinces within and about the Sownde, the 30. day of Iune, in the yeere of our Lord 1589. and of her Maiesties raigne the one and thirtie 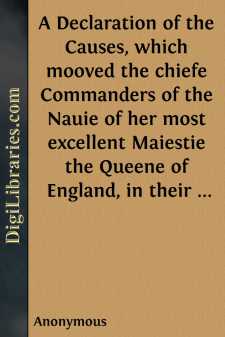 A DECLARATION OFTHE CAVSES, WHICH MOVEDthe chiefe Commaunders of the Nauie ofher most excellent Maiestie the Queene of England, in their voyage and expedition for Portingall, to take and arrest in the mouth of the riuer of Lisbone, certaine shippes of Corne, and other prouisions of warre bounde for the said Citie, prepared for the seruices of the King of Spaine, in the ports and Prouinces within and about the Sownde, the 30. day of Iune, in the yeere of our Lord 1589. and of her Maiesties raigne the 31.

Whereas it is a thing out of cГ…ВЌtrouersie, that certaine Marchaunts and inhabiting within and neere vnto the Sownde in the kingdome of Denmarke, cГ…ВЌmonly called the Marchants of the Hanse townes, wil grieuously exclaime among forreine Nations, against the chiefe Commanders of the Fleete of the most excellent Queene of England, as infringers of the law of Nations, and of the ancient contracts made betwixt the Kings of England, and the Hanse marchants, and as contemners of the Newtralitie which the said Hanse marchants doe chalenge to themselues, whereby they thinke and hold it lawfull for them to exercise the trafique of all marchandises whatsoeuer, with all people whosoeuer, euen in the times of greatest hostilitie betweene whatsoeuer kings and Princes, by reason of the intercepting & arresting of certaine of their ships, passing to the ayde and furnishing of the king of Spaine with corne, and prouisions of warre: it seemed good vnto her foresaid excellent Maiestie, in respect of her good will, together with singular affection and loue to the sacred Empire, the Emperours Maiestie himselfe, the noble Princes of Germanie, and to all & singular the Estates of the Empire, in this publike sort to make it manifest for what causes the aforesaid Hanse ships were stayed by the officers of her Fleete, and as lawfull prises taken and confiscated. Which is done to no other end or purpose, but to make it euident that the same action doth stand & agree with equitie and iustice, and to be a thing most probable, that other Princes whosoeuer, their seruants and Officers in the like case, and vpon the like occasion, woulde not haue failed to take the like course.

For it is a thing notorious & sufficiently knowen, not onely to the fewe Hanse townes, but also to all Christendome, that the king of Spaine is transported with a mortall hatred against the Queenes Maiestie of England: a witnes whereof is the intended but not performed inuasion of the kingdome, and Dominions of England by the saide king the yeere last past, furthered by him with all his force, but by the mercie of God vtterly disappointed.

Which exulcerate malice of the Kings minde, not lately sprong vp, but of long time lurking in the closet of his heart, yet foreseene and still preuented by the Queenes Maiestie, she often by her messengers sent to him for that purpose, as with most A.3. gentle medicines indeuoured to asswage, to reduce him to a newe minde meeter for a Prince, and so great a king as himselfe: to the ende that remouing out of both their mindes not onely the staine, but also the suspition of the staine of discontentments, they might dispose themselues to enter and conclude a firme peace and durable friendship, according to the ancient leagues betweene their progenitours and fathers, and their kingdomes, for the space of many yeeres happily continued....