A Catechism of Familiar Things; Their History, and the Events Which Led to Their Discovery. With a Short Explanation of Some of the Principal Natural Phenomena. For the Use of Schools and Families. Enlarged and Revised Edition. 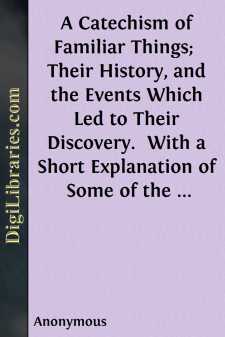 Moisture collected from the atmosphere by the action of cold. During the day, the powerful heat of the sun causes to arise from the earth and water a moist vapor, which, after the sun sinks below the horizon, is condensed by the cold, and falls in the form of dew. Dews are more copious in the Spring and Autumn than at any other season; in warm countries than in cold ones: because of the sudden changes of temperature. Egypt abounds in dews all the summer; for the air being too hot to condense the vapors in the day-time, they never gather into clouds and form rain.

Horizon, the line which bounds the view on all sides, so that the earth and sky appear to meet. A Greek word, from the verb signifying to mark boundaries.

Temperature, degree of heat or cold.

Condense, to cause the particles of a body to approach or unite more closely.

What are its uses?

It cools and refreshes the vegetable creation, and prevents it from being destroyed by the heat of the sun. All hot countries where there is little or no rain are therefore blessed with this provision by the all-bountiful Creator, to render them luxuriant and inhabitable; and the dews which fall are so copious, that the earth is as deeply soaked with them during the night as if a heavy rain had fallen. For this reason also it is, that we so often read in the Bible of the "dew of Heaven" being promised to the Israelites as a signal favor.

From what does the vapor originate?

Vapor is water, combined with a still greater quantity of caloric,—that is, an imponderable and subtile form of matter, which causes the sensation of heat; and which, driving asunder the particles of the water, renders it aëriform.

Subtile, thin, not dense, or compact.

Particle, a small portion of matter.

Aëriform, having the form of air.

The fluid which covers more than three-fifths of the surface of our globe, and which is necessary for the life and health of the animal and vegetable creation; for without water there would be neither rain nor dew, and everything would perish. It is likewise a necessary beverage for man and the inferior animals.

In how many states do we find Water?

In four: 1st, solid, as in ice, snow, hail, &c.; 2d, fluid, as in its common form; 3d, aëriform, as in steam; and 4th, in a state of union with other matter. Its most simple state is that of ice, which is water deprived of a certain portion of its caloric: crystallization then takes place, and the water becomes solid and is called ice.

Crystallization, the process by which the parts of a solid body, separated by solution or fusion, are again brought into the solid form. If the process is slow, the figure assumed is regular and bounded by plane and smooth surfaces.

Solution, the diffusion of a solid through some liquid.

From what cause is the Water deprived of its caloric?

From the coldness of the atmosphere: underneath the poles of our globe it is mostly solid; there it is similar to the hardest rocks, and may be cut with a chisel, like stone or marble. This great solidity is occasioned by the low temperature of the surrounding air; and in very cold countries ice may be ground so fine as to be blown away by the wind, and will still be ice.

Poles, the extremities or ends of the axis, an imaginary line, supposed to be drawn through the centre of the earth; or when applied to the heavens, the two points directly over them.

Is ice the only instance of Water existing in a state of solidity?

No; it is found in a solid state in many minerals, as in marble, &c., and is then called water of Crystallization. It is essential, in many cases, to their solidity and transparency.