A Canyon Voyage The Narrative of the Second Powell Expedition down the Green-Colorado River from Wyoming, and the Explorations on Land, in the Years 1871 and 1872 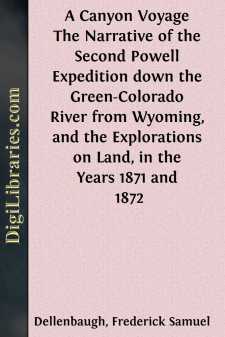 This volume presents the narrative, from my point of view, of an important government expedition of nearly forty years ago: an expedition which, strangely enough, never before has been fully treated. In fact in all these years it never has been written about by any one besides myself, barring a few letters in 1871 from Clement Powell, through his brother, to the Chicago Tribune, and an extremely brief mention by Major Powell, its organiser and leader, in a pamphlet entitled Report of Explorations in 1873 of the Colorado of the West and its Tributaries (Government Printing Office, 1874). In my history, The Romance of the Colorado River, of which this is practically volume two, I gave a synopsis, and in several other places I have written in condensed form concerning it; but the present work for the first time gives the full story.

In 1869, Major Powell made his famous first descent of the Green-Colorado River from the Union Pacific Railway in Wyoming to the mouth of the Virgin River in Nevada, a feat of exploration unsurpassed, perhaps unequalled, on this continent. Several of the upper canyons had been before penetrated, but a vague mystery hung over even these, and there was no recorded, or even oral, knowledge on the subject when Powell turned his attention to it. There was a tale that a man named James White had previously descended through the great canyons, but Mr. Robert Brewster Stanton has thoroughly investigated this and definitely proven it to be incorrect. Powell's first expedition was designed as an exploration to cover ten months, part of which was to be in winter quarters; circumstances reduced the time to three. It was also more or less of a private venture with which the Government of the United States had nothing to do. It became necessary to supplement it then by a second expedition, herein described, which Congress supported, with, of course, Major Powell in charge, and nominally under the direction of the Smithsonian Institution, of which Professor Henry was then Secretary and Professor Baird his able coadjutor, the latter taking the deeper interest in this venture. Powell reported through the Smithsonian; that was about all there was in the way of control.

The material collected by this expedition was utilised in preparing the well-known report by Major Powell, Exploration of the Colorado River of the West, 1869-1872, the second party having continued the work inaugurated by the first and enlarged upon it, but receiving no credit in that or any other government publication.

As pointed out in the text of this work, a vast portion of the basin of the Colorado was a complete blank on the maps until our party accomplished its end; even some of the most general features were before that not understood. No canyon above the Virgin had been recorded topographically, and the physiography was unknown. The record of the first expedition is one of heroic daring, and it demonstrated that the river could be descended throughout in boats, but unforeseen obstacles prevented the acquisition of scientific data which ours was specially planned to secure in the light of the former developments....